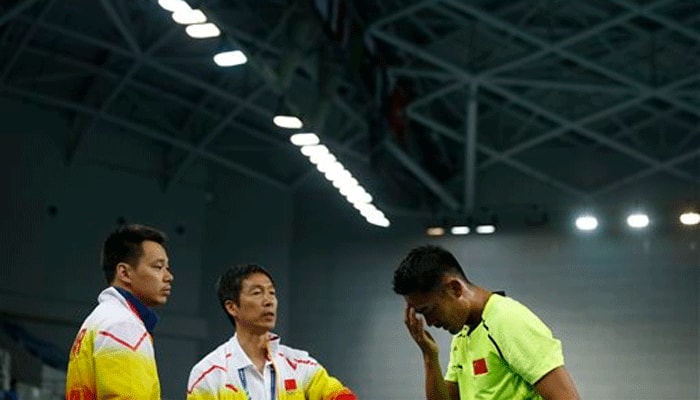 According to the Shanghai Daily, Li blamed "man-made reasons" for Wednesday`s 3-2 defeat at the Gyeyang Gymnasium in Incheon, South Korea.

"We did not lose because of technique or tactics, but due to some man-made reasons. The South Koreans deliberately controlled the wind blow in the stadium and took advantage of it," Li was quoted as telling reporters.

"When we played with tailwind, the wind was very strong, but when the wind was behind them, they shut down the air conditioning.

"Before the Games opened, they had been training in this stadium for 15 days, so they are more familiar with the stadium than us."

"The air conditioning was too strong in the first set. It was hard for him to play from the baseline which is his strong point," said Li.

"In the second set, the wind was gone, but it was back in the third set again. This is Asian Games, but if it was the world championships or Thomas and Uber Cup, the BWF (Badminton World Federation) wouldn`t have allowed this to happen."

Chen Long was also quoted as saying that the air conditioning was a factor. "I was actually trying to play safe because of the strong wind over the court, obviously he (Son) was more adaptive to it," he said.

Japanese coach Keita Masuda voiced similar concerns after his team`s 3-2 loss to South Korea in the quarter-finals, the report said.

"The wind in this stadium is very strange, always supporting the hosts. Every time we change sides, the wind seems to change sides as well," he was quoted as saying.

Officials have said they are trying to address players` concerns but that they also have to keep the arena cool for spectators.

On Wednesday Lee Hyun-Il, brought out of retirement for the Games, won the deciding match for South Korea as the hosts took down badminton`s super-power in the men`s final.