Mutaz Essa Barshim wants to beat one of athletics oldest world records at the Asian Games, while Zhang Peimeng just wants to drag Asia into the modern 100m world with a sub-10 second time. 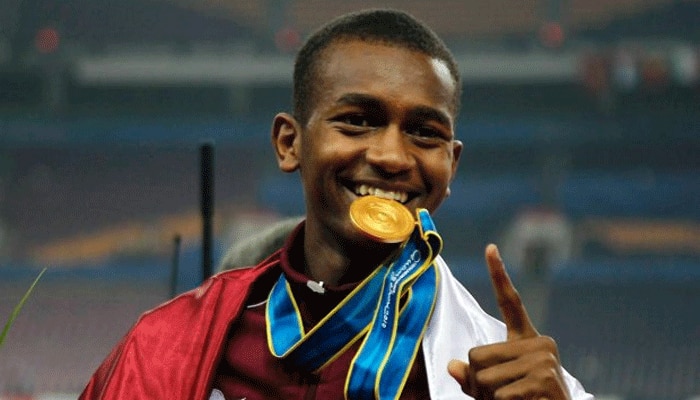 Incheon: Mutaz Essa Barshim wants to beat one of athletics oldest world records at the Asian Games, while Zhang Peimeng just wants to drag Asia into the modern 100m world with a sub-10 second time.

A week of track and field at the Incheon Games starts Saturday with a lot at stake.

The 23-year-old said he is now ready to beat his idol`s mark.

"My goal is to beat the world record," a confident Barshim told AFP. "I`m completely ready for the Asian Games.

"I will do my best to make this great achievement and create memories for Asia."

The towering Qatari, whose younger brother is also a high jumper, won gold in at the Guangzhou Asiad four years ago and a bronze at the 2012 London Olympics.

Organisers are desperate for a world record from Barshim on Monday as they seek to fill Incheon`s new 62,000-seater athletics stadium.

And also looking to make history is China`s Zhang, who will bid to become the first Asian-born sprinter to race 100m in under 10 seconds on Sunday.

Zhang raced to a Chinese record of 10.00sec at last year`s world championships in Moscow."I`m feeling in very good shape right now," the 27-year-old, who is appearing at his first Asian Games, told the Tencent news portal.

"But I`m not worrying much about the time."

Asia is the last continent not to have a real sub-10 second sprinter. It claims a 9.99sec 100 metres, but it was set by Samuel Francis -- a Nigerian-born sprinter who took Qatari nationality.

Zhang`s chances received a setback when Japanese teenager Yoshihide Kiryu pulled out of the Asian Games this month over a torn left hamstring.

Kiryu, 18, clocked 10.01 as a schoolboy last year and had also been tipped to achieve the sub-10 feat. It was hoped he and Zhang would spur each other on in a mouthwatering Japan v China sprint.

Zhang`s biggest threat for gold is likely to come from Qatar`s Femi Ogunode, originally from Nigeria, who is also defending his men`s 200 and 400m titles.

Ogunode is seeking redemption after he returned to action in January following a two-year doping ban for using the drug clenbuterol.

In women`s track, Japanese record-holder Chisato Fukushima will put her tag as Asia`s fastest woman on the line when she bids to retain the 100m and 200m titles she won in Guangzhou four years ago.

Chinese long jumper Li Jinzhe is looking to build on an impressive season which has seen him improve his personal best three times.

He recorded last year`s fourth-longest leap in the world at 8.34m and is another one to watch.

Xie is attending Asiad after a busy period competing in Brussels` Diamond League final and the IAAF Continental Cup in Marrakech, Morocco.

"The Asian Games is the one competition that he must win," his coach Sun Haiping, Liu`s ex-mentor, said according to Sina Sports.

The local crowd will be rooting for Kim Deok-Hyeon as he aims to defend his long jump title and goes for glory in the triple jump.