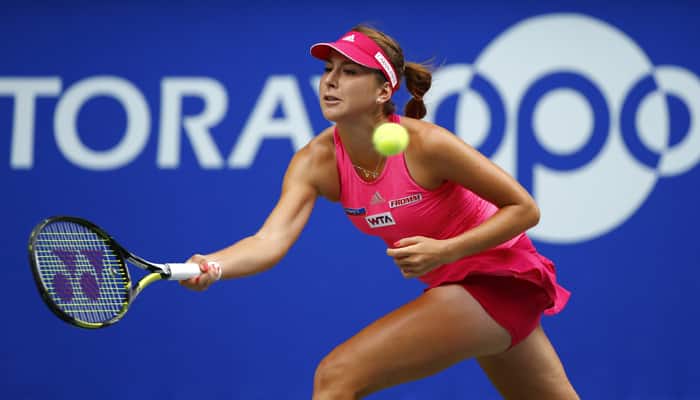 Belinda Bencic of Switzerland returns a shot to Svetlana Kuznetsova of Russia during their first round match of the Pan Pacific Open tennis tournament in Tokyo
Share:
Updated:
Sep 15, 2014, 18:39 PM IST
Source:
AFP

The wildcard broke the Russian veteran`s serve twice in the first set and three times in the second to win the match at Ariake Tennis Park in only 68 minutes.

The 17-year-old is on the back of a run to the quarter-finals at the US Open in New York.

Kuznetsova, the 2004 US Open and 2009 French Open title winner showed her desperation to outpower Bencic with deep serves, as she double-faulted on the hard surface six times.

Only four first-round singles matches were played on Monday at the $1 million event.

Four top-seeds, including world number eight Angelique Kerber of Germany and ninth-ranked Dane Caroline Wozniacki enjoyed a bye to the second round.

It was a happy return to Tokyo for Bencic who won her first match on the WTA tour in the same event last year. Her world ranking has risen to 34th from below 300th in a year.

"I was feeling great from the beginning," said the right-hander, coached by her father Ivan and occasionally by Melanie Molitor, the mother of Switzerland`s former world number one Martina Hingis.

"It was surprising it went so easy. I was expecting a hard match."

Kuznetsova admitted she was well beaten.

"She has nothing to lose. She`s on the rise. She`s been playing very well," the 23rd-ranked player said of Bencic.

"Sometimes you can make double faults because you try to make deep serves. I lost my chances -- some easy shots."

Benecic, the 2013 French Open and Wimbledon junior champion, made it to the third round of the main Wimbledon event this year and has targeted a further rise up the rankings.