Praising Kidambi Srikanth and Saina Nehwal for their success at the India Open Super Series, chief national coach Pullela Gopichand on Sunday said it was a 'dream come true' before stressing that consistency will be the key for Indian players to bring more laurels in future. 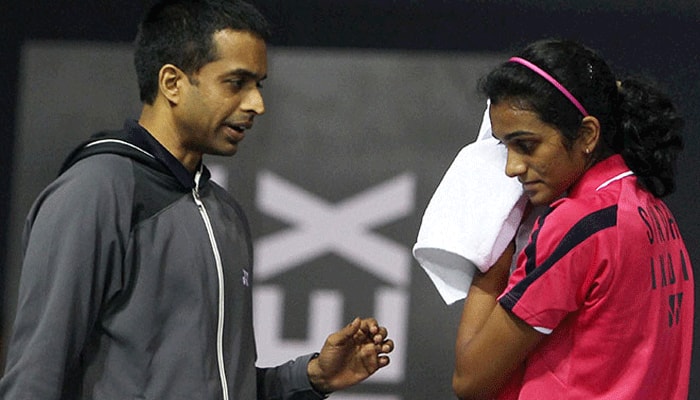 New Delhi: Praising Kidambi Srikanth and Saina Nehwal for their success at the India Open Super Series, chief national coach Pullela Gopichand on Sunday said it was a 'dream come true' before stressing that consistency will be the key for Indian players to bring more laurels in future.

Saina and Srikanth made it a double bonanza for India today as they won the women's and singles titles beating Thailand's Ratchanok Intanon and Denmark's Viktor Axelsen respectively in the finals.

"It's fantastic. Last few days have been great for Indian badminton. I'm extremely happy," he said.

"When we started off, it was a dream. Today its a reality. Could've been better With H S Pranoy knocking out Viktor Axelsen. Guru also had his chance against Xue Song. We could've had three players in the semis.

"Having said that, they're all young. There is still time and it's a great beginning and we hope to continue with our success.

Talking about Srikanth, he said: "I think consistency will be his key. We've seen him play well. When you win, you normally look invincible. Talking from the coach's perspective, somebody's winning matches and suddenly they become slow and then they look as ordinary as anybody.

"If you look at Srikanth's game, he has a big smash, good net hand, and with the range of strokes he has, it makes him very good at the end points.

"Because he has those elements of surprise. All he needs to do is create the opening and when he does, he has a big one to round it up and follow it up really well. So from that perspective, I think Srikant has a very good game.

"Having said that, we also have H S Prannoy, RMV Gurusaidutt, Ajay Jayaram, I think all of them have good strength."

Asked about Saina's rise to the number one status, Gopichand said: "Fantastic. Last few years have been great for her. And I think to reach this ranking, is amazing for Saina, badminton and for sport in general."