Miami Heat forward Chris Bosh was hospitalized on Thursday with a pulmonary complaint but Heat coach Erik Spoelstra declined to confirm reports that doctors suspect a blood clot in his lung. 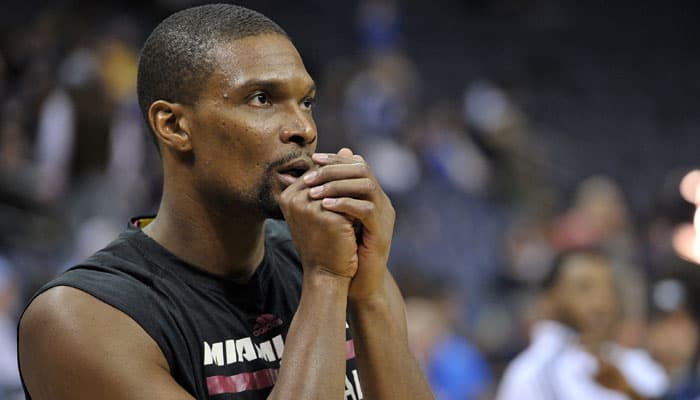 Miami: Miami Heat forward Chris Bosh was hospitalized on Thursday with a pulmonary complaint but Heat coach Erik Spoelstra declined to confirm reports that doctors suspect a blood clot in his lung.

"It`s too early for an ultimate diagnosis," Spoelstra said, although he added that Bosh`s condition was not life-threatening.

He said doctors were still conducting tests to diagnose the problem.

On Thursday, Spoelstra had said Bosh was "under the weather" and voiced the hope that Bosh wasn`t suffering from flu.

If he does have a blood clot in his lung, he could miss the remainder of the NBA season as he undergoes treatment, possibly with blood thinners.

Cleveland`s Anderson Varejao was diagnosed with a blood clot in his lung in January of 2013 and missed the remainder of that campaign.

Brooklyn Nets power forward Mirza Teletovic was diagnosed on January 23 with multiple blood clots in his lungs and is out for the rest of the season.

Bosh`s illness is another setback for a Heat team that seemed to be getting healthy heading into the second half of the season.

Guard Dwyane Wade is to return to action on Friday when the Heat play the New York Knicks. He missed seven games heading into the All-Star break with a strained hamstring.

"I feel good," said Wade, who hasn`t played since he was hurt on January 27 in a game against Milwaukee. "I`m ready to get back to playing basketball."

Wade and Bosh were both in New York at the weekend for the All-Star Game festivities. The team-mates then travelled to Haiti for two days.