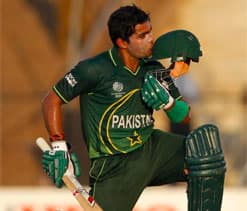 Johannesburg: Pakistani wicketkeeper-batsman Umar Akmal has reportedly been absolved of all charges in a traffic violation case after the concerned police officer forgave him, saying that the player is a `national hero`.

Akmal was arrested in February for violating traffic rules and scuffling with policeman Mohammad Zeeshan, although he was released on bail after being detained for hours.

According to Sport24, however, a court last month issued a warrant against him, ordering him to appear on March 11, although Akmal had denied the charges and accused the police of one-sided action.

But a court official said that the magistrate cleared him of all charges after Zeeshan forgave Akmal, and quoted the police officer saying that he has forgiven the player as he is a national hero.

Zeeshan further said that Akmal`s father also apologised to him out of the court, following which he asked the court to end the case, although he added that he would perform his duties again if Akmal ever violates traffic rules in the future.

Akmal, who rescued his team with a fighting hundred against minnows Afghanistan in the Asia Cup last month, left for Bangladesh on Friday along with the rest of the Pakistan team for the World Twenty20 tournament, the report added.