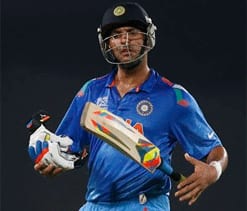 New Delhi: As Yuvraj Singh faces public ire for his poor showing in the lost World T20 finals against Sri Lanka, many of his fans and Bollywood have rallied behind the beleaguered batsman.

Yuvraj`s 21-ball 11 sucked the momentum out of India`s innings on Sunday and some unruly fans pelted stones at the all-rounder`s residence in Chandigarh.

Bollywood though took to social media to extend their support to the left-hander, who was instrumental in getting two World Cups to India -- the 2007 T20 title and the 50-over trophy in 2011.

Megastar Amitabh Bachchan wrote on his blog, "Ok .... So we lost to Sri Lanka in the World Cup final T20 tonight .. Yes disappointed, but proud of our team and our boys for reaching the final, against the best teams in the world .. It was just not our day and the better team
won...Congratulations to Sri Lanka, who played really well .."

Actor Varun Dhawan, whose `Main Tera Hero` is currently in cinemas, tweeted, "Yuvi won us the World Cup, he gave us happiness when he was still having cancer. How can people forget that #Shame..."

Director Madhur Bhandarkar also voiced his support for the out-of-form player, tweeting: "Who are these idiots who are pelting stones just because we lost a game? Have we forgotten it was @YUVSTRONG12 who won us both d World Cups?"

"Wow, INDIA wins a Final, we put them so High up on a Pedestal, INDIA looses, and we rip them apart. Guys it`s a sport, win some, loose some."

Columnist and writer Shobhaa De also came to the defence of Yuvraj, tweeting, "What poor losers we are! Shame on those throwing stones on Yuvraj `s home."

Earlier, Yuvraj had found support from retired icon Sachin Tendulkar and his Punjab teammate and friend Harbhajan Singh, who urged fans to not be bitter about just "one bad day".