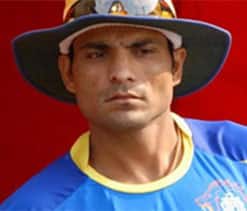 New Delhi: India can rely on their spinners to reclaim the World Twenty20 title, says Joginder Sharma, the hero of country`s win against Pakistan in the inaugural edition`s final.

After a terrible road accident in 2011, Sharma returned to domestic action last year and is now endeavouring to make his way into the Indian team.

India have struggled in the competition after success in 2007 but the Haryana all-rounder feels now is the chance to reclaim the trophy.

"You can`t predict results in T20s but we have an experienced line up. We have strong batting and it is a good fielding unit as well. But since the matches will be in Bangladesh, our spinners can play a big role there. We have a good spin attack and I feel we have a good chance," Sharma said.

He had bowled the last over in the 2007 T20 final when Pakistan needed 13 runs with one wicket in hand. After being hit for a six by Misbah- ul-haq, he eventually dismissed the Pakistani batsman to hand India a thrilling win.

Sharma said he has endured tough moments in his career as he was laid low by shoulder and ankle problems in 2008. He made a good comeback in 2009 but a car accident in 2011 again pegged him back.