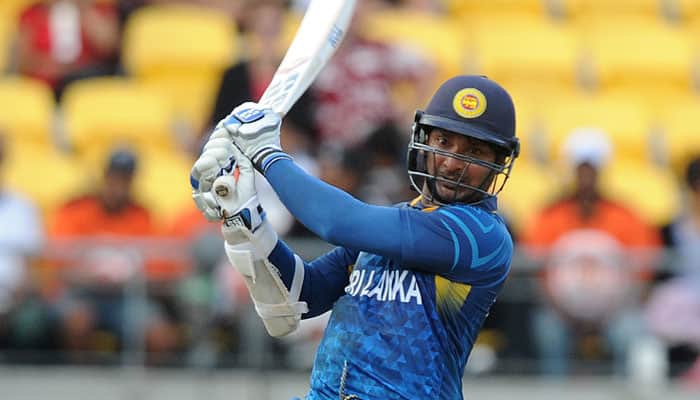 Hobart: Kumar Sangakkara created history by notching up a record fourth consecutive ODI century that powered Sri Lanka to a crushing 148-run win over Scotland in their final group league match of the ongoing cricket World Cup here on Wednesday.

In becoming the first man in history of One-Day Internationals to score centuries in four successive innings, the 37-year-old Sri Lankan veteran together with opener Tillakaratne Dilshan (104) helped the team put up a mammoth 363 for nine after electing to bat at the Bellerive Oval.

Set a daunting target in the group A match, Scotland's innings ended at 215 in 43.1 overs, and the minnows have another match to play in the mega-event where they have failed to win a single game so far.

Sri Lanka are now second in the points table, behind New Zealand, with four wins in six games. However, the final positions in the group will be known only after the New Zealand-Bangladesh and Australia-Scotland games.

The 195-run partnership for the second wicket was Sangakkara and Dilshan's 20th century stand in ODIs, leaving them second only to Indian legends Sachin Tendulkar and Sourav Ganguly.

Playing in the last one-day tournament of his illustrious 15-year career, Sangakkara, in red-hot form in the mega-event, blazed his way to an enterprising 124 off 95 balls, while Dilshan struck a 99-ball 104.

Skipper Angelo Mathews (51) smashed the second-fastest half-century of this World Cup, off 20 balls. The Islanders though lost a series of wickets towards the end, denying them a 400-plus total.

The Scots were off to a disastrous start, losing three wickets with just 44 runs on the board in the 12th over. The game was as good at that point but Freddie Coleman (70) and skipper Preston Mommsen (60) shared 118 runs for the fourth wicket to steady the ship.

However, both batsmen got out after making fluent half-centuries, each hitting seven boundaries while defying the Lankan bowlers for a while.

Richie Berrington made 29 off 22 balls to delay the inevitable.

Earlier, Sri Lanka lost opener Lahiru Thirimanne (4) early but Dilshan, who registered his second century of the tournament, and Sangakkara stitched together a massive second- wicket partnership to take the islanders to a commanding total even after the Scottish bowlers pulled things back a little in the end.

Leading the run-scorers' chart, Sangakkara, who recorded his 25th ODI ton, has so far aggregated 496 runs in six innings with Dilshan a distant second with 395 in as many outings. India's Shikhar Dahwan is third in the batsmen's list.

Sangakkara has been on a rampage with tons coming against Bangladesh (105), England (117), Australia (104) and Scotland, and is now averaging a resounding 124 in the event.

The Scottish bowlers were in for a leather hunt as Dilshan, whose innings was laced with 10 fours and a six, combined superbly with Sangakkara, who hit 13 fours and four sixes in his knock.

Dilshan departed soon after registering his 22nd ODI ton but Sangakkara carried on in the same vein.

The left-handed wicketkeeper-batsman got stuck into tall medium-pacer Alasdair Evans (2-72) in the 36th over to smack a six and four boundaries.

But medium-pacer Josh Davey (3-63) made it count in the powerplays - 36 to 40 overs - to send back Mahela Jayawardene (2) and then Sangakkara to check the Lankan surge.

Mathews wielded the willow to smash a 21-ball 51.

The last-wicket pair of Nuwan Kulasekara (18 not out) and Dushmantha Chameera (12 not out) also did their bit.