Had Raina been fit, it would have been a selection conundrum between him and Keder Jadhav, his like for like replacement in the first game. 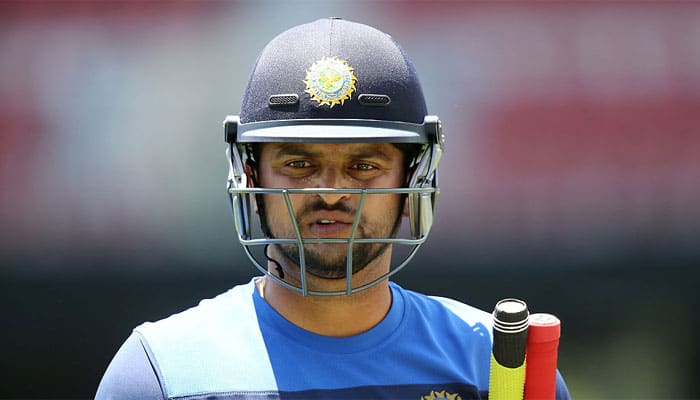 New Delhi: Recovering from a bout of viral fever, Suresh Raina was today back in the nets but the middle-order batsman will miss India's second one-dayer against New Zealand after the Team management decided to give him more time to regain his fitness.

Raina, who had missed the opening ODI at Dharamsala due to fever, batted for about 45 minutes at the nets but the Indian team management confirmed he is still not 100 per cent match fit to figure in Thursday's second ODI here.

"The BCCI Medical team has confirmed that Suresh Raina, who is recovering from a bout of viral fever and had missed the Dharamsala ODI, is ruled out of the second ODI of the Paytm ODI Trophy against New Zealand," BCCI said in a release.

"The team management has allowed Suresh Raina more time to recover. There will be no replacement in the team," it added.

Raina, who didn't bat in Uttar Pradesh's Ranji opener against Madhya Pradesh as he was running temperature, looked comfortable while batting in the nets as he was seen playing lofted shots against spinners at will.

Probably the viral fever must have taken its toll as he is still not possibly fit enough to play 100 overs of international cricket.

Had Raina been fit, it would have been a selection conundrum between him and Keder Jadhav, his like for like replacement in the first game.

Jadhav had picked up two wickets with his handy part-time off breaks in the first ODI. At the nets, Jadhav was seen bowling off breaks to both Raina and Dhoni for an extended period of time alongside other off-spinner Jayant Yadav.

In fact Jadhav bowled him for a period of time at the nets. He was also given throwdowns by team's expert Raghavendra, batting coach Sanjay Bangar and chief coach Anil Kumble.

Dhoni batted the longest time at the nets. He faced Dhawal Kulkarni for a considerable period and also practised the pull shot against throwdowns. He then spent another 25 minutes batting against spin especially Jayant.

During one such delivery, Jayant was seen asking his skipper: "So point stays up" which indicated that the skipper wanted him to not give him width outside off-stump.

Jayant altered the length and bowled a conventional off break slightly short of length.

Dhoni came down the track but was too close to the delivery before checking his shot. There were other match simulations also during the session.

It was an optional session at the Feroz Shah Kotla ground as skipper Dhoni along with Raina batted for a considerable length of time.