MS Dhoni on Thursday said that it was the first game in which his team did well in all the three departments. 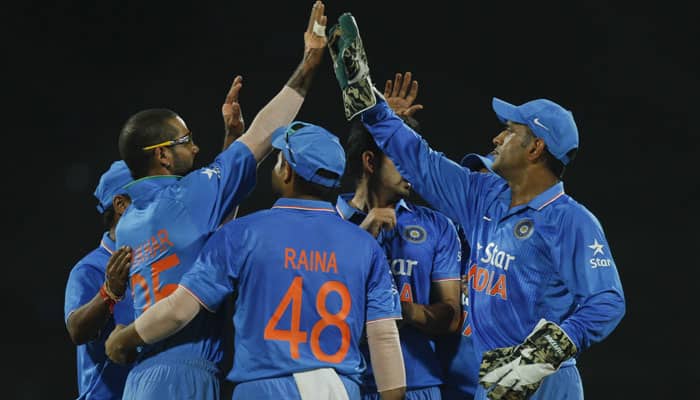 Chennai: Praising centurion Virat Kohli for his superb batting in the side's series-levelling win against South Africa, Indian skipper Mahendra Singh Dhoni on Thursday said that it was the first game in which his team did well in all the three departments.

Electing to bat, India rode on Kohli's brilliant 138 to post 299 for eight in 50 overs and were then able to restrict the visitors for 264 for nine, despite a valiant century by skipper AB de Villiers. The five-match series is now tied at 2-2.

"As a total team we did well, bowled well and batted well. They (batsmen) need to give themselves a bit more time and that was the reason to promote (Suresh) Raina and after he gets going he can play the big shots. Everyone has scored runs in the series now so that's good going into the last match. Virat batted exceedingly well and assessed the conditions well," Dhoni said after the match.

The bowling led by Bhuvneshwar Kumar (3-68) did their bit to restrict Proteas and ensure a comfortable 35-run win at the MA Chidambaram Stadium. Harbhajan Singh also bagged two crucial wickets with Mohit Sharma, Axar Patel and Amit Mishra picking up 1 each. Dhoni had a word of praise for his bowlers.

"It was important that bowlers took the responsibility, so I shuffled them up and the three spinners were good. The fast bowlers also have to do their job and finish their quote of 10, or at least nine overs so I decided not to use a part-time bowler," he said.

Cramping at the end of his 140-ball knock, laced with 6 fours and 5 sixes, Kohli was happy to score his 23rd ODI ton in a winning cause.

" It always feels good when you get a century and the team wins and while chasing I like it because you get a chance to finish the game. Any century in a winning cause is always special," said the Test skipper.

Kohli also praised De Villiers 112-run knock that made him uneasy in the dressing room, "I told him (de Villiers) in the dressing room my heart was in my mouth when he was batting, he plays unbelievable shots. He's a very modest man too, never praises himself so I'll do that for him. The credit goes to him, he fought it out".

It was a mutual admiration society as De Villiers also praised Kohli for his match-winning knock.

"It was a pretty tough wicket to play on and Virat assessed the conditions very well early on. The ball was turning quite a bit and I got a few away at the end, I worked hard and hopefully we'll take some positives to Mumbai," said De Villiers.