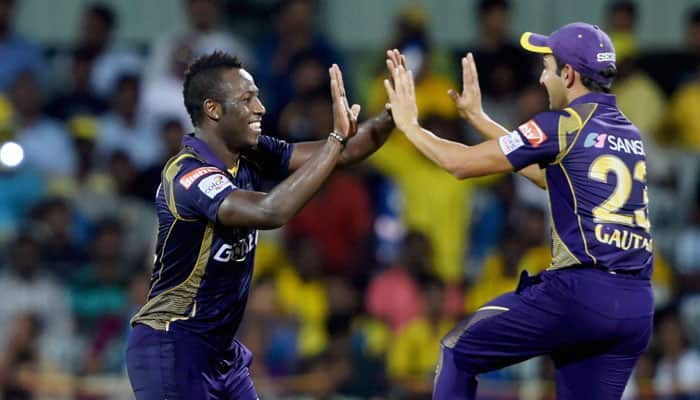 It's a do-or-die match for the home team, who are currently placed sixth with 12 points in their kitty.

Going into the match, Mumbai can take heart from the fact that they have 10-5 win-loss record against the defending champions. The role of West Indian duo – Kieron Pollard and Lendl Simmons – is quite crucial for Mumbai. Opener Simmons performed well thus far up the order, whereas, Pollard has proved his worth once again as an all-rounder.

On the other hand, Gautam Gambhir-led KKR will look to reach atop of the table by winning today's encounter against erratic MI.

KKR would be high on confidence after three wins on the trot against Sunrisers Hyderabad, Delhi Daredevils and Kings XI Punjab. Though KKR squad looks more balanced than Mumbai, the hosts can't be taken lightly.

Andre Russell: A crucial cog in the KKR line up, the West Indian has already proved his worth by playing some match-winning knocks in the on-going season. A big hitter of the cricket ball, Russell has the ability to change the course of the match single-handedly with bat and ball. The Jamaican provides the team a much-needed depth in their bowling. The 27-year-old has bag-full of tricks up his sleeves to keep a batsman in check even in the death overs. Against Mumbai he can once again emerge as the key player for his franchise.

Rohit Sharma: It's high time, the skipper of Mumbai Indians' should lead his side from the front. Even after getting the starts he has failed to convert them into match-winning knocks. Even the ploy of shuffling himself in the batting line order didn't work for him. It seems his confidence has also went for a toss after a string of poor perfromances with the bat. He is undoubtedly a dangerous batsman of the T-20 format and spending some time at the crease before going for the big hits might help the Mumbaikar. In a crucial clash against KKR, he has to make sure that he leads the side by an example.