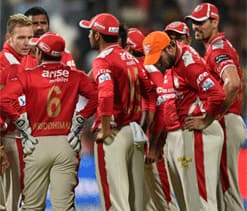 According to the official fan meter on iplt20.com, the Kings XI Punjab`s official handle #KXIP clocked 28,125 tweets, while Kolkata`s #KKR garnered 23,085 tweets. The final between these two teams was the most tweeted match of IPL 7.

Interestingly, the winning boundary off Piyush Chawla`s bat was the most tweeted moment of the final, which had two near perfect innings from Wriddhiman Saha and Manish Pandey. It was followed by Saha`s six to reach the first ever century in an IPL final, Pandey’s dismissal on 94 while chasing 200, Chawla’s six off Mitchell Johnson in the penultimate over and Saha’s consecutive boundaries in the last over of the Punjab innings.

Thanks to his swashbuckling innings of 115 off mere 55 deliveries, Saha became the most tweeted player in the final. Man of the Match Manish Pandey was second, followed by his skipper Gautam Gambhir.

Other than the final match, the tournament also witnessed some close contests and rightly, those matches raked up good tweets. The Qualifier 2 between KXIP and CSK, the final match of the league round between Mumbai Indians and Rajasthan Royals were right on top.

Overall, IPL 7 witnessed a 24% increase in tweet activities from the previous edition. With an umpteen number of fans engaging through the ever popular T20 league, the official hashtag #PepsiIPL saw an impressive 59% increase over 2013.