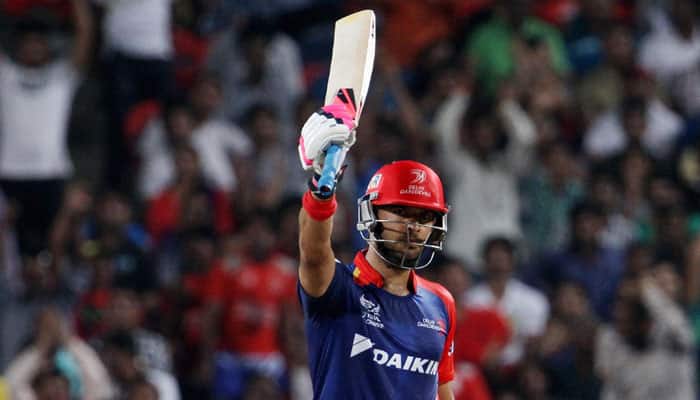 Chasing a challenging 166 for a win, Aggarwal (68) and Yuvraj (55) shared 106 runs for the third wicket to help Delhi win the match with one ball to spare at the Maharashtra Cricket Association Stadium. 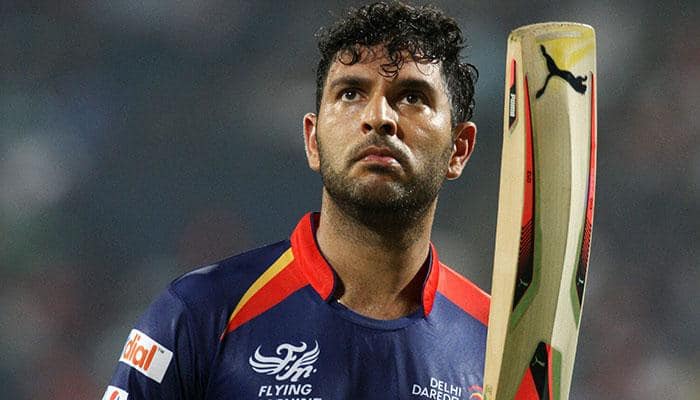 Aggarwal, who was dropped on 42 by Sandeep Sharma of the bowling of Mitchell Johnson, hit seven fours and two sixes in his 48-ball knock while Yuvraj smashed five boundaries and three sixes in his 39-ball innings.

Yuvraj showed glimpses of his old form with some exquisite shots as Delhi reached 169 for five in 19.5 overs.

Both Aggarwal and Yuvraj were out in consecutive deliveries in the 19th over but by that time, Delhi needed just seven runs to win from 10 balls. Angelo Mathews knocked off the winning run -- a four -- of the bowling of Axar Patel.

Today's win was the first for Delhi in 12 matches over two seasons. They had lost their last nine matches of the previous edition last year before starting this season with two losses before today's win.

Coming together in the eighth over at team score of 53 for two when captain Jean-Paul Duminy (21) was run out in a bizarre way, Yuvraj and Aggarwal hit some lusty blows against Kings XI bowlers after getting themselves in.

Aggarwal smashed Johnson for two fours and a six in the 15th over and then Yuvraj joined the party by hitting two sixes off Axar Patel next over.

The asking rate fell below six in the 18th over and Delhi knocked off the remaining runs.

Captain Duminy was unlucky to be run out after a promising start as he fail to reach the crease after a collision with Axar Patel who slid the ball onto the stumps. Duminy was thrown off balance and lost his bat and landed on his gloves. The TV umpire, after a long review, ruled that Duminy was short of his crease.

Earlier, Virender Sehwag top-scored with a 41-ball 47 as Kings XI Punjab posted a competitive 165 for seven after electing to bat.
The highlight of the Kings XI innings was the 71-run partnership for the second wicket between opener Sehwag and Wriddhiman Saha (39) after Murali Vijay was out for 19.

Sehwag hit four boundaries and two sixes in his useful knock. He hit a six and two fours off successive balls bowled by Delhi premier spinner Imran Tahir in the ninth over.

Sehwag was out in the 15th over after he went for his second six in as many balls off Delhi captain Jean Paul Duminy only to hole out to Coulter-Nile.

Kings XI were 73 for one at the halfway mark and they added 92 runs from the second 10 overs for the loss of six wickets. Their middle-order batsmen did not have big scores nor any substantial partnership but each of them made quick and useful runs even as wickets fell at regular intervals.

For Delhi, leg-spinner Tahir grabbed three wickets though he was expensive by conceding 43 runs while captain Jean-Paul Duminy got two wickets. Amit Mishra and Angelo Mathews took a wicket each.

Duminy used as many as seven bowlers in the Kings XI innings.

IPL 8: Injured Aaron Finch says he is likely to miss rest of the season