Live updates from the opening ceremony of the Indian Premier League being held at the Salt Lake Stadium in Kolkata. 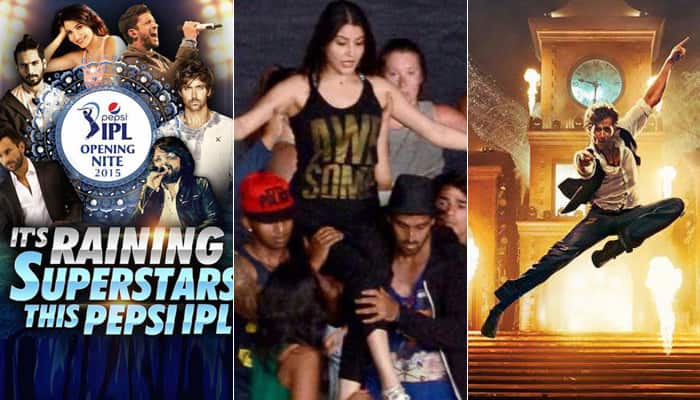 New Delhi: After the rain delay, the Bollywood celebrities enthralled the crowd at the Salt Lake Stadium with their back-to-back performances.

10:35 pm - That's the end of the ceremony! We hope you enjoyed the start of the event as well as our coverage!

10:33 pm - Saif invited all the performers from Bollywood - Pritam, Shahid Kapoor, Anushka Sharma, Farhan Akhtar and Hrithik Roshan for one final time, they waved towards the crowd and the fireworks adorned the sky!

10:24 pm - Hrithik Roshan is here to show his out of the world dance skills! His first performance was on the song 'Ik Pal Ka Jeena' from his debut film 'Kaho Na Pyaar Hai'. Hrithik ended his performance with a 'Dhoom Macha Ley' performance. That could go down as the performance of the night!

10:02 pm - Bollywood's rockstar, the multi-talented Farhan Akhtar is here! He entertained the audience with several songs from his superhit movie Rock On!

09:46 pm - Saif announces the name of the next performer - Bollywood siren Anushka Sharma and the crowd cheers, "Virat! Virat!"

09:43 pm - Saif does a poll for crowd's favourite cricketer. He mentions Chris Gayle, Virat Kohli, MS Dhoni and Gautam Gambhir. All three Indian cricketers get a huge cheer from the crowd.

09:40 pm - Saif Ali Khan is back and there was a video which showed the flashback of all the previous winners.

09:30 pm - The Bollywood stars are all set to rock the event and Shahid Kapoor is the first one to enthrall the audience! He is dancing to his own songs from Bollywood movies.

09:25 pm - Time for captains to sign. MCC Spirit of Cricket Pledge. MS Dhoni was the first one to sign it, JP Duminy, George Bailey, Gautam Gambhir, Rohit Sharma is next, Shane Watson is next, Virat Kohli is next and Dhawan does the honours in absence of David Warner. The captains pose for a group photo before leaving the stage.

09:16 pm - Ravi Shastri has taken over the proceedings.

09:16 pm - KKR's skipper Gautam Gambhir comes to the stage with the trophy in his hands, the crowd is ecstatic to see their local skipper!

09:07 pm - the ceremony kicks off with a traditional Bengali song written by Rabindranath Tagore - "anondo loke, mongola loke..." where several women are performing with lamps in both their hands! Bollywood music composer Pritam is behind the mic!

9:00 pm – The good news is that the rain has stopped and we can't wait for the action to begin!

07: 50 pm - The latest update is that it's raining at the Salt Lake Stadium. The celebrities and everybody else is just waiting for it to stop!

The highlights of the Opening Ceremony:

The event will start at 7:30 pm IST and is likely to last for two and half hours.

All eight captains will be present at the event and will take the MCC Spirit of Cricket Pledge.

Captain of defending champions Kolkata Knight Riders - Gautam Gambhir - will put the trophy back in play. This will signal the official start of the tournament

After a pulling off a controversy-free tournament last year, the organisers would again be hoping for a smooth run when the 47-day tournament starts.

The eight teams will be involved in an intense battle in these 47 days and one can expect plenty of high-profile shows mixed with nail-biting moments.

No issues with MS Dhoni, enjoyed playing under him, reiterates Yuvraj Singh