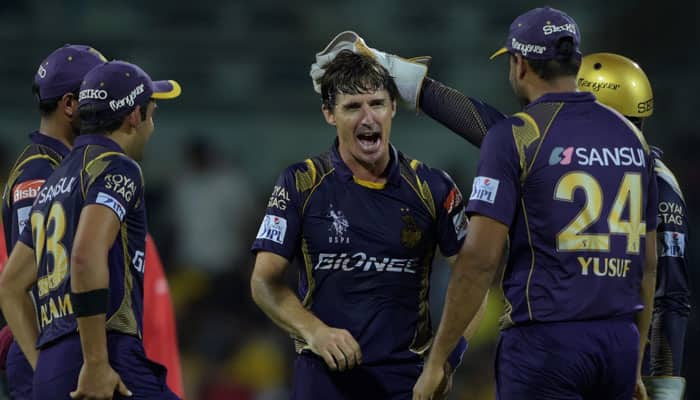 Umesh Yadav (2 for 34) came up with a sensational opening over while Brad Hogg (2 for 17) and the other bowlers choked the Sunrisers to submission as the visitors were restricted to 132/9 in reply to the decent 167/7 posted by the Knight Riders.

The victory carried the Knights to the third spot in the league table with 11 points from 10 games. Sunrisers are still fifth with eight points from nine outings. 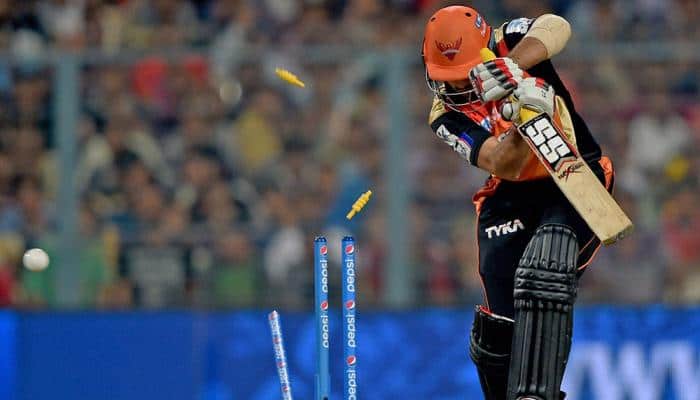 Chasing a 168-run target, the visitors were jolted at the start of their innings with pacer Umesh Yadav disturbing rival skipper David Warner`s (4) citadel in the third delivery and then castling Naman Ojha (0) with his last ball. After over one, the Sunriders were 6/2.

Shikhar Dhawan(15) was the next man out as the Sunrisers were reduced to 29/3 in the fifth over.

All-rounder Moises Henriques, however, then took the matter into his own hands as he smashed Yusuf Pathan for 19 runs in his first over.

The 50 came up in 6.5 overs but the innings stuttered again as the Sunrisers kept on losing wickets at regular intervals and found themselves in all sorts of bother at 69/6 by the 12th with two dismal run-outs adding to their woes.

Karn Sharma (32; 21b, 0x4, 3x6) Aprovided some late entertainment for the scanty crowd as he belted off-spinner Johan Botha for three consecutive sixes, but by then the die had already been cast.

Earlier in the night, the Knights were off on a canter as skipper Gautam Gambhir and Robin Uthappa plundered 50 runs of just 5.3 overs.

However, Gambhir (31; 23b, 5x4) fell soon thereafter trying to hit Karn Sharma for a biggie.

Uthappa (30; 27b, 3x4) and Jamaican hard-hitter Andre Russell (1) followed their leader into the dugout a little while later, even as the scoreboard kept ticking along at a decent pace.

The 100 came up in the 13th over, and just as KKR looked settled with Manish Pandey and Ryan ten Doeschate, the former fell short of his crease trying to sneak a single amidst indecision.

For Sunrisers, Karn Sharma and Bhuvneshwar Kumar claimed two wickets each while Pathan played an unbeaten cameo of 30 in 19 balls for KKR.