No rift between MS Dhoni and Virat Kohli: Mohammed Shami 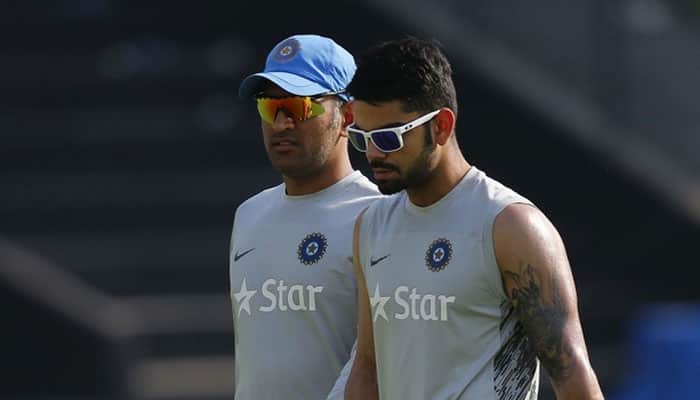 "That the team is divided and the team is not performing -- there is no truth in these things. I have shared the dressing room with all of them including Virat and Mahi Bhai. I never felt anything like that (there is a rift between them). If media is making an issue then it is wrong," he told PTI here.

The injured pacer is in the city undergoing fitness training at the National Cricket Academy. Shami has been out of action since the World Cup due to discomforting pain and injury in his left knee.

Shami also requested media not to highlight "baseless" stories of disunity and rift between Kohli and Dhoni, and instead write about the team's ad players' performance.

"I request media not to highlight these baseless stories. This only divides the team, and affects team's and players' performance," he said.

Asked whether Dhoni should give up captaincy after a poor show by India against Bangladesh, Shami said it is not fair to draw conclusions on the basis of one bad series.

"I like his captaincy, I mean look at his record. Mahi Bhai has won us World Cups in all formats of the game. One should not draw conclusions based on just two series where we haven't performed. According to me, he should continue," he said.

Asked when is he likely to begin bowling in the nets,

Shami hoped that he would be able to do that next month onwards.

"I cannot write and give, but I hope to start bowling in the nets next month," he said.

Shami has been out of action since the World Cup after he complained of pain in his knees.

After he was ruled out of last IPL, Shami, who was the fourth highest wicket-taker of the World Cup with 17 wickets in seven matches, underwent knee surgery in New Delhi.

Asked how is he feeling after five to six days of his rehabilitation at the NCA, Shami said his body is in a better shape now.

"From past five to six days, I have been undergoing fitness training here. I am now in a comfort zone and my body is not feeling tight. There is no problem and I am slowly increasing the weight," he said.

Would it be a easy for him to get back into the Indian team after an injury, Shami said, "In my reckoning, whoever performs well, he should be in the team."

Asked if Dhoni missed his services in the dismal Bangladesh tour, Shami said indisciplined bowling cost India the series for the first time against the hosts.

"The series against Bangladesh went awry. As far as bowling is concerned, it is important to pick wickets with new ball in first 10 overs and in powerplays. That probably did not happen. We picked wickets late which resulted in Bangladesh scoring many runs. Even the line and length was a bit indisciplined," he said.