With four among India's 15-man World Cup squad still unfit, veteran left-hander Yuvraj Singh is still in with a chance to board the plane to Australia and New Zealand. 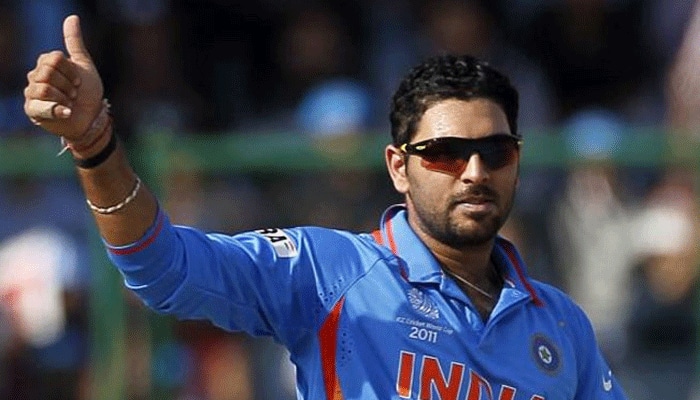 New Delhi: With four among India's 15-man World Cup squad still unfit, veteran left-hander Yuvraj Singh is still in with a chance to board the plane to Australia and New Zealand.

Currently, there are fitness concerns surrounding Rohit Sharma, Ravindra Jadeja, Ishant Sharma and Bhuvneshwar Kumar. These players will undergo a fitness test on February 7 to prove their fitness to the team management.

Yuvraj could make a dramatic return to Team India if all-rounder Ravindra Jadeja fails to recover in time for India's World Cup opener against arch-rivals Pakistan on February 15.

In fact, considering his form in the Ranji Trophy, many believed that the national selectors could make a last-minute U-turn to include Yuvraj in the 15-man squad despite initially ignoring him while selecting the 30-man probables list.

As he showed with a Man of the Series performance in the 2011 World Cup, the 33-year-old has the ability to play a key role for India with both bat and bowl. There is no denying, Yuvraj is a far superior batsman than Jadeja.

With his big-match temperament and vast experience, Yuvraj is the ideal replacement if the Saurashtra all-rounder fails to prove his fitness.

Speaking at a cricket conclave on Monday, Yuvraj expressed disappointment at not making the cut for the upcoming World Cup.

"It was disappointing not being picked for the World Cup. It's a decision which you can't help. At the moment, I am focusing on the Ranji Trophy and putting in my best efforts to make a comeback," he said.

In case Rohit Sharma is deemed unfit, Murali Vijay will be in with a shout to earn a call-up. The Tamil Nadu batsman was in fine form during the Test series in Australia and is most certainly a candidate with the right technique to negotiate the fast and bouncy tracks at the World Cup.

Pacer Ishant Sharma is currently nursing his ankle injury and there is high probability of him being declared unfit on February 7. Hence, Mohit Sharma and Dhawal Kulkarni have been asked to stay back in Australia until fitness test is concluded.

With India's poor batting in ODIs and the persisting injury woes, Indian fans may well be granted their wish of Yuvraj Singh's fairytale return to help India defend their World Cup crown.

Australia captain is second most important after PM: Darren Lehmann