After so many false dawns, West Indies cricket fans will be wary of reading too much into Sunday`s third test win over England but in drawing the three test series, the Caribbean side showed some significant signs of improvement. 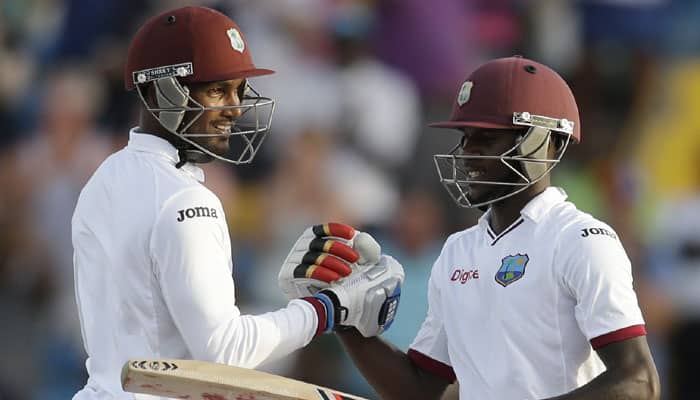 Barbados: After so many false dawns, West Indies cricket fans will be wary of reading too much into Sunday`s third test win over England but in drawing the three test series, the Caribbean side showed some significant signs of improvement.

West Indies cricket had been close to disintegration after last year`s cancelled tour of India and the bitter dispute between the players and the board.

The regional team has also suffered from the preference of several players for the shortest form of the game - Chris Gayle, Lendl Simmons, Kieron Pollard, Andre Russell and Sunil Narine were among those on duty in the Indian Premier League during this series.

It may have been undiplomatic but it was not unreasonable for ECB chairman Colin Graves to describe West Indies as "mediocre" prior to the series.

But the appointment of former West Indies test batsman Phil Simmons as the new coach looks a smart move and together with bowling consultant Curtly Ambrose, the backroom team appear to have instilled some much needed professionalism into the team.

Sunday`s successful run chase, with the home side set a target of 192 on a wicket offering plenty of encouragement to the bowlers, was exactly the kind of situation that might have led to collapse under pressure for West Indies teams of the recent past.

Instead, Jermaine Blackwood and Darren Bravo knuckled down for a 108-run fifth-wicket partnership, scoring at steady rate in 31.5 overs, to set up the victory.

There was focus, discipline and skill in that partnership and Blackwood, by instinct a classic Jamaican strokeplayer, showed with his crucial unbeaten 47 he could also play the kind of sensible knock that was needed.

The 23-year-old`s 85 in the first innings and his unbeaten 112 in Antigua in the first test, illustrated that he could become the middle order presence that West Indies have so sorely lacked in recent times.

Jason Holder shows great promise with both bat and ball, his unbeaten 103 to save the first test was his only big score but his five wickets in Barbados were vital.

Kraigg Brathwaite would ideally have an experienced opening batting partner to guide him through this early stage of his career but he too will be encouraged by a century in the second test in Grenada.

Jerome Taylor, whose career looked almost over due to injury two years ago, now looks back to his best as his performance in Barbados, where he picked up six wickets, illustrated.

There is still a fragility to the batting, as the second test collapse in Grenada showed, but this is, by test standards, a very young team.

The opening batting pair in the third test, Bajans Brathwaite and Shai Hope, were 22 and 21-years-old respectively, an unusually youthful combination to head a batting line-up.

They will have to grow up quickly though - next up in June is a two test series against Australia which will offer a stern test of their technique and composure.

At least they will go into that mini-series in a positive mood after drawing with the third-ranked team in test cricket.