France are hoping to join tournament favourites Brazil, Germany and Spain in the latter stages as they look to make amends for losing the Euro 2016 final to Portugal. 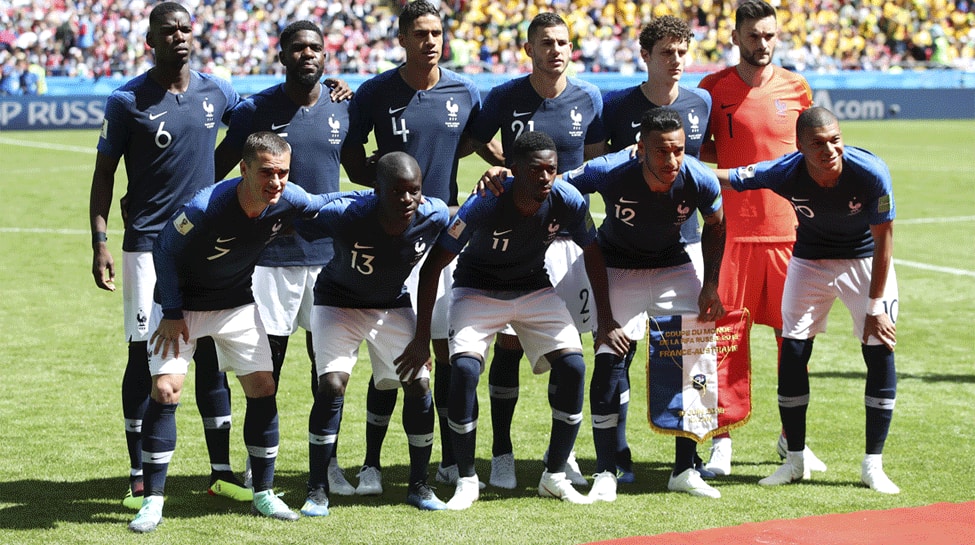 Kazan: Antoine Griezmann scored from the first VAR-assisted penalty awarded in the history of the World Cup as title hopefuls France battled to a 2-1 win over gutsy Australia in Kazan on Saturday.

Griezmann, expected to make a huge impact on Russia 2018 after topping the Euro 2016 scorers with six goals, was left frustrated by a solid Socceroos defensive display in a tight first half.

The Atletico Madrid star wrote his name into the history books after he went down under a tackle from Josh Risdon in the penalty box in the second half of the Group C fixture.

Referee Andres Cunha from Uruguay did not initially award a spot-kick but after viewing the VAR footage, ruled it was a penalty and Griezmann coolly slotted past Socceroos' goalkeeper Mathew Ryan at the Kazan Arena.

Here are the updates from the match:

90+4 minute: Australia are pressing hard but the strikers fail to take a shot on goal with first touch.

90+1 minute: The Australian's have lacked momentum after France took the lead. Can they pull off a draw? This World Cup has seen a lot of late goals.

88 minute: The Australian's seem out of steam but make a crucial save after their goalkeeper rushed out of the six-yard box.

83 minute: After working really hard in the defence the Australian resolve seems to be breaking. They are giving away corners and set pieces.

80 minute: GOAL!!  The Australian's were all behind the ball but Pogba chipped the ball to the Australian goalpost, the ball pitches inside the line. France 2-1 Australia.

75 minute: Corentin Tolisso takes one for the team and trips Australia's Juric. Yellow card for Tolisso.

72 minute: Corner for France. Defender Pavard shoots a high ball away from the goal.

70 minute: The Aussies have a substitution. Jackson Irvine in for Tom Rogić.

69 minute: Substitution for France. Giroud and Fekir replace Griezmann and Dembele. Could the fresh legs inspire France to a victory at the Kazan stadium.

68 minute:  Griezmann gave France the much-needed push with his goal but after the equaliser from Australia, the match looks poised and balanced.

65 minute: The Australian are trying to get behind the French backline, they have qualified past the league stages only once.

63 minute:  Substitution for Australia. forward Juric in for Nabbout. The possession is now 50-50.

60 minute:  Australian's appeal for a handball by Umtiti. Referee goes for the review.

57 minute: Penalty. The VAR gives the first ever penalty and it goes to France.

54 minute:  Risdon challenges Greizmann. The initial reaction from the referee was play-on but it has been reviewed.

52 minute: Australia's Nabbout could not make most of the pass from the right in the penalty box. The Australian's are pressing hard.

The French dominated the first-half but are yet to break the Australian defence. France have great firepower but they need to make things happen up-front as their strikers struggled in the first-half. Australians would be more than happy with a draw.

45 minute: That was close! Australia's Behich shoots a wide ball. France under pressure.

43 minute: Australia's Sainsbury intercepts a volley to Griezmann from the right flank. That could have been Griezmann's 13th International goal!

41 minute: France seem out of place. They are easily giving away the ball in the final third.

39 minute: France enjoy possession but have failed to make any alteration to the scorecard. 5 minutes to go.

37 minute: Australia's Aaron Mooy has had more touches on the ball than anybody else. It sums up the impressive show from the Men in Yellow.

34 minute:  France have had only 1 shot on target after the 8th minute, Australia have been wonderful in the defence, so far.

32 minute: Corner for France. Another brilliant display of defence by the Australians blocking a pass from Griezmann at the close range.

30 minute: Superb defending by the Australians. Defender Sainsbury makes a timely interception as Griezmann looked dangerous with a cross from the right flank.

29 minute: The Australians are making their presence heard at the Kazan Arena. The French do look nervous out there.

26 minute: Free-kick for Australia. This is the 13th free-kick of the match. French goalkeeper makes a comfortable save. France counter attack.

23 minute: Great interception by Aaron Mooy, does not give Griezmann space in the right flank.

19 minute: France's Corentin goes down after a challenge from the Australian midfielder Jedinak. Free-kick to France.

17 minute: Free-kick for Australia on the left flank. That was close. Trent Sainsbury could not reach the ball in time as the French goalkeeper claws it away. Corner for Australia.

14 minute: Corner!  France have their first corner from the match, headed away from the goal by Australian defender.

13 minute: Yellow card!  First booking of the match and Australian forward  Mathew Leckie gets a Yellow for his tackle on Lucan Hernandez.

11 minute: Free-kick for Australia, but waste the opportunity with an elevated air ball.

9 minute:  France are fired up in the early minutes of the match but the tall Australian goalkeeper has not been troubled by the French strikers, yet.

5 minute: The French continue to threaten up-front. Griezmann takes a long shot, from the outside the box but Ryan dives on to his left for the save.

3 minute: Free-kick for France. Paul Poga fires the ball in, but it goes straight into the hands of goalkeeper Mathew Ryan.

1 minute: Great run by Kylian Mbappe on the right flank. Comfortably gets past the Australian defence.