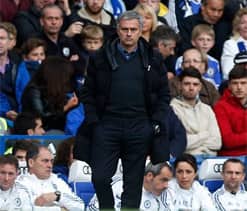 London: Chelsea manager Jose Mourinho turned his ire on Premier Leaque officials by slamming a "fake" table after his side returned to the summit with a 3-0 win at home to Stoke on Saturday.

It also left the London club two points in front of Manchester City but, significantly, Manuel Pellegrini`s third-placed side will have two games in hand over both Chelsea and Liverpool come the end of this weekend.

And that doesn`t sit well with Mourinho, who believes it is wrong that the clubs vying for the title won`t have played the same number of games until the final week of the season.

"You look to the top part of the table and, some teams, they have more matches than others.

"In the top of the league we cannot say we need `X` points to be champions.

"This, in the best league in the world, I don`t think is the best image we are giving and it`s not the best situation," the Portuguese added.

"To play matches in hand in the last week of the season, I don`t think is adapted to this top football country."

Nevertheless Mourinho was happy with a win that set Chelsea up for the second leg of their Champions League quarter-final against Paris Saint-Germain at Stamford Bridge on Tuesday.Chelsea face a tough task to remain among Europe`s elite after a 3-1 first-leg loss in France, a reverse that followed a shock 1-0 defeat by Crystal Palace.

But Mourinho was pleased by the way the Blues bounced back against Stoke.

"It took us 10 or 15 minutes to recover a little bit of confidence and self-esteem after two defeats," he said. "After that, the team played well.

Mourinho placed each of the goals Chelsea conceded in Paris in the `avoidable` category but the Stoke shut-out was their eighth in a row at Stamford Bridge.

"If we concede one goal against Paris or keep a clean sheet we have a chance for success," he added.

"If we concede two goals and have to score five then we can`t do the job. It is important to defend well against Paris."

Mourinho had also harsh words to say about his forwards after the first leg, claiming he didn`t have any "true strikers" -- a direct reference to the lack of scoring prowess of Fernando Torres and Demba Ba, neither of whom started against PSG.

Torres was recalled for the Stoke game but made little impact. Nevertheless, Mourinho was careful only to offer words of encouragement to the Spain striker this time round.

"As always, he gave everything he could," he said. "He worked hard for the team. It was a pity he didn`t score a goal because strikers need goals."

Stoke are not in any immediate danger of relegation as they already have 40 points, but manager Mark Hughes, a former Chelsea striker, admitted he had expected more from his side.

"I was disappointed in what we produced," he said. "In recent weeks we have been a lot better than that.

"For whatever reason, we didn`t have enough players playing at their maximum. We weren`t able to ask enough questions of a good Chelsea team."

Giggs mulling over quitting Man Utd as player, coach at end of season