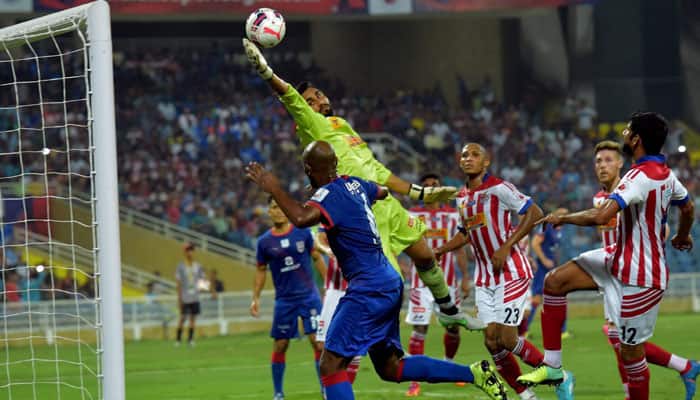 For the away side, Hume scored in the 34th, 45+1, 81st minute alongside Augustin Fernandes's 76th minute goal. Selim Benachour was the only scorer for the home side.

The Canadian striker scored the second hat-trick at the stadium in the second season after Mumbai's Sunil Chhetri and the third by a player in the current season after Chennaiyin FC's Stevin Mendoza and Chhetri.

Marque-player-cum manager Nicolas Anelka started for the first time in the season and went in with a 5-2-3 combination for the match. Only two chages were made in their starting 11, with Anelka replacing Frederic Piquionne, while Cristian Bustos sat out to make way for Juan Aguilera.

On the other hand, the visitors went in with a 4-5-1 formation for the crucial match by making three changes - Jewel Raja, Syed Rahim Nabi and Denzil Franco replacing Baljit Sahni, Arnab Mondal and Rino Anto.

The home side kick-started the proceedings for the night with an aggressive mode creating lot of chances to go ahead but failed to convert it into fruitful results.

The best chance came in the eighth minute but the combine effort from Chhetri and Anelka went in vain as the ball was blocked by goalkeeper Amrinder Singh.

Mumbai continued to push hard at the visitors' defence but it was too tough to break the rock solid pillar of Atletico.

It was in the 34th minute when the away side made the best use of the opportunity to open the scoring in their favour.

Jaime Gaivilan took a couple of touches before sending a floater towards Hume who had both feet off the ground and his right footed first time finish got beyond Subrata Paul into the far corner to go 1-0 up.

The away side kept on pressing in the home side penalty box to try net their second of the night.

One minute added into the first half saw Atletico go 2-0 up via penalty.

Singam Subash made a clumsy tackle in the box to bring Gavilan down, but Hume stepped in to take the spot kick and fired it in past Paul diving to his left to make it 2-0.

With a much improved performance compared to their previous matches, the away side went into half time with score line reading 2-0 in their favour.

Coming into the second half, Mumbai looked like setting their target right from the start as they went on a full attacking mode to get their first goal of the night and make a comeback into the match.

The consistent push into the Atletico box yielded good results as Benachour who substituted for Darren O'Dea scored the first goal for the home side in the 71st minute to have the supporters go bizarre.

Atletico came back strongly in the 76th minute with Augustin Fernandes scoring the third goal for the side to keep them in safe position.

Five minutes later in the 81st minute, Hume scored his third to take his side 4-1 up and make sure the visitors bag full three points.

Mumbai next face Delhi Dynamos FC in a away match on November 6, while Kolkata take on NorthEast United FC on November 7 at home.