Andre-Pierre Gignac marked his first start for France in more than four years with a goal and two assists as the Euro 2016 hosts eased to a 3-0 friendly win in Armenia on Wednesday. 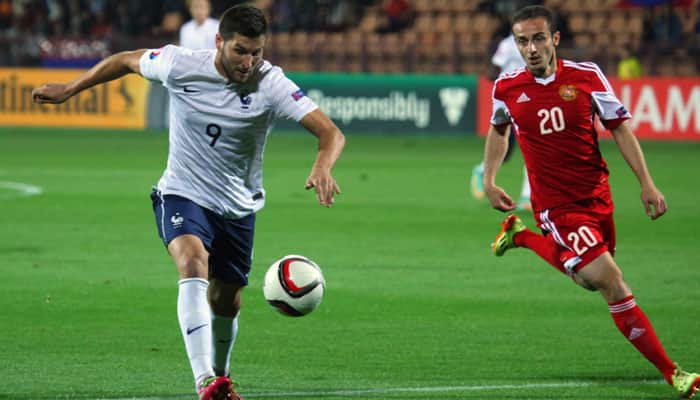 Yerevan: Andre-Pierre Gignac marked his first start for France in more than four years with a goal and two assists as the Euro 2016 hosts eased to a 3-0 friendly win in Armenia on Wednesday.

Gignac set up goals for Loic Remy and substitute Antoine Griezmann either side of converting a second-half penalty in Yerevan as Didier Deschamps` side followed up their 2-1 friendly win over Portugal at the weekend with a comfortable victory.

Deschamps made eight changes to his starting line-up from that win on Saturday, with goalkeeper Steve Mandanda, Raphael Varane and Blaise Matuidi the only players to keep their places.

Karim Benzema, who had picked up a knock against Portugal, was dropped to the bench to allow Marseille striker Gignac, the leading scorer in Ligue 1, to start for Les Bleus for the first time since the 2-1 defeat to South Africa in the last match of their disastrous 2010 World Cup campaign.

And on the occasion of his 19th cap, Gignac did not disappoint, ensuring that he should remain part of Deschamps` future plans, although the player himself refused to get carried away.

"The competition for places in attack is ferocious. I don`t think I scored any points tonight particularly," he said.

"But compared to my last call-up (for a World Cup qualifier in Georgia last year), where I was too timid, I showed greater responsibility. I had told myself this was maybe my last chance."

Gignac needed just eight minutes to make his presence felt, controlling a long diagonal ball from Jeremy Mathieu and crossing from the right side of the box for Chelsea forward Remy to tap in at the back post.

The 28-year-old almost got his name on the scoresheet eight minutes before the interval when he was left with just the `keeper to beat six yards from goal, but the veteran Roman Berezovski got down well to save.

Nevertheless, against an Armenia side deprived of Borussia Dortmund`s Henrikh Mkhitaryan and several other leading players due to injury, the chances kept coming for the visitors in the second half.

When substitute Paul Pogba`s weaving run into the area was ended unceremoniously by Varazdat Haroyan, Gignac stepped up to send Berezovski the wrong way from the spot and score his first international goal in exactly five years since netting in a 3-1 defeat of Austria.

Remy and Gignac both had opportunities to add to the lead before the latter`s long through ball was picked up by Griezmann, who rounded replacement `keeper Gevorg Kasparov to complete the win.

France are next in friendly action in November, when they entertain Albania and Sweden, while Armenia, who are yet to win in Euro 2016 qualifying Group I, go to Portugal next month.