Arsenal continue their defence of the FA Cup with a home tie against lower division opposition in the fifth round but manager Arsene Wenger has promised the Gunners will not be taking Middlesbrough lightly. 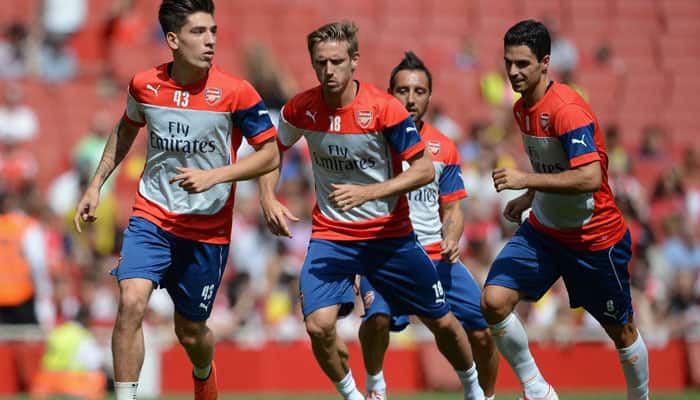 London: Arsenal continue their defence of the FA Cup with a home tie against lower division opposition in the fifth round but manager Arsene Wenger has promised the Gunners will not be taking Middlesbrough lightly.

Boro are currently top of the Championship table and produced one of the shocks of the previous round by winning 2-0 at Premier League champions Manchester City.

Arsenal won 3-2 at Brighton and Hove Albion, another Championship side, that weekend and Wenger admitted there would be no excuses should the Gunners fail to progress.

"They are not afraid to take on the big boys," the Frenchman said of Aitor Karanka`s side.

"They are well organised, play good football and they are very creative. We won`t be surprised by them. We don`t have the excuse to be surprised as they beat Manchester City.

"It is a big opportunity as well -- that is how we have to look at it."

Wenger confirmed goalkeeper Wojciech Szczesny will be recalled and hinted at a debut for new signing Gabriel Paulista, the centre-back who joined from Villarreal last month.

Szczesny lost his place to David Ospina following a run of sub-standard performances and being caught smoking in the dressing room following a 2-0 defeat at Southampton.

The Pole played against Brighton however and Wenger said: "He is completely ready and determined to play."

As for Gabriel, Wenger said: "He is a player who has overall good qualities: good pace, good in the air, good in one against one, but it`s best I don`t talk too much and let him play and he shows how good he is."Forward Alexis Sanchez may not be risked because of a knee injury and one man who will definitely play no part is midfielder Aaron Ramsey, who has been sidelined by a persistent hamstring problem that Wenger admitted was causing concern.

"We haven`t found the underlying reason," he said. "There is an underlying reason that is medical or bio-mechanical because he is a guy who is serious, works hard, has a controlled and disciplined life, so there is no obvious reason why he should have muscular problems.

"I don`t think that anything has been neglected; we just have to find a reason why it has happened."

Jack Wilshere is back in training following ankle surgery and should play some part. "He`s motivated and focused to come back as quickly as possible," Wenger said.

"He worked very hard. But he has still been out for four months. What he needs now is to get back."

Middlesbrough are aiming to show that the club is ready to return to the Premier League after a six-year absence.

Karanka, who worked as assistant to Jose Mourinho at Real Madrid, has taken 15 months to turn a club that was in danger of dropping into the third tier into one capable of competing with the best sides in the country.

The 41-year-old said: "I had to change the mentality. When I came here, the players were concerned about their own performance, their own behaviour, and it was difficult to get the message across that it is all about the team.

"At the beginning, we had problems but we started to get results, and people started to realise that we could win games regularly. We have brought in our methodology. I learned a lot from working with Jose in Madrid, and we share a lot of the same methods."

Middlesbrough will be without injured defender Daniel Ayala, but full-back George Friend expects to recover from a virus to take his place in the back four.

Karanka added: "Everything is changing here. When we arrived we were getting 12,000 crowds, but there have been times this season when we`ve sold out our 35,000 stadium, and taken 7,000 to away games so we have to make the most of the momentum."