Australia`s Socceroos have finally booted their "inferiority complex" into touch after winning a first Asian Cup, coach Ange Postecoglou said as he unveiled a bold blueprint for the future. 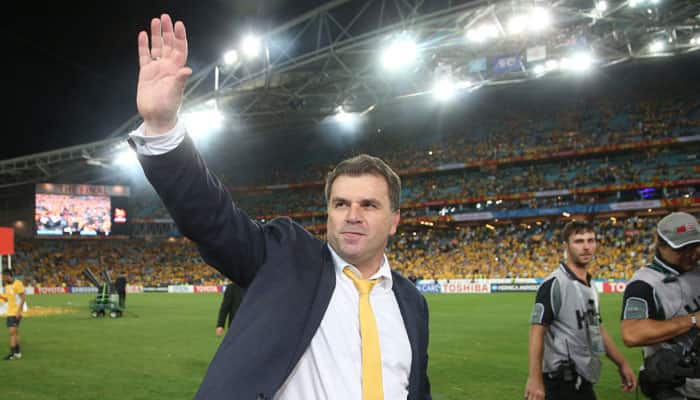 Sydney: Australia`s Socceroos have finally booted their "inferiority complex" into touch after winning a first Asian Cup, coach Ange Postecoglou said as he unveiled a bold blueprint for the future.

Australian football awoke to a new dawn -- and a few hangovers -- the morning after Saturday`s nail-biting 2-1 victory over South Korea in the final in Sydney.

"I doubt there will be an Aussie going to sleep too easily tonight after watching that game," said Postecoglou after delivering Australia`s first silverware since they defected to the Asian confederation in 2006.

"If I`d said 14 months ago we`d be sitting in this position, people wouldn`t have believed me. But this is not where it ends for us. It`s the beginning, I`m not putting any limits on it. We want to go to the next World Cup to make an impact, not just to be there."

Australia did it the hard way against a Korean side desperate to end an Asian Cup title drought stretching back to 1960, substitute James Troisi smashing home a dramatic extra-time winner to trigger pandemonium among a crowd of 76,000 at Stadium Australia.

"It`s all about leaving watermarks and we`ve left a pretty high one now," said Postecoglou, who survived calls for the chop after gutting a Socceroos side living off glorious failures from years past and blooding a raft of new players.

"Whatever we do from now on we want to be better. When I took the job I said it was important that we shed ourselves of this inferiority complex that Australian footballers can only do certain things and only play in a certain way."I`ve never believed that either with Australian coaches," added the 49-year-old. "Because I`m an Australian coach apparently I`m limited in what I can do.

"Every time I`ve coached I`m always coaching against somebody who`s apparently smarter and better than me because they`re from overseas."

Australia`s Asian Cup triumph came four years after their "golden generation" fell at the final hurdle to Japan and was due in large part to gems unearthed by Postecoglou, including the rising star Massimo Luongo, who plays for English third-tier side Swindon Town.

The 22-year-old was voted player of the tournament ahead of the effervescent Tim Cahill, vindicating Postecoglou`s decision to overhaul the national team and suggesting the future of Australian football, post-Cahill, is in safe hands.

"We won`t take a backward step to anyone," said a defiant Postecoglou, who like Cahill bleeds green and gold. "We don`t do it any other sport and there`s no reason we should be doing it in football."

With Western Sydney Wanderers holding the Asian Champions League title, the Socceroos completed a double at club and national level, an unprecedented achievement unlikely to stop rumblings of discontent in the region opposed to Australia gatecrashing their party.

"It`s great but it shouldn`t be the full stop," said Postecoglou. "We need to keep pushing on. The goal for this confederation should be to break the European-South American monopoly on the World Cup. It may sound far-fetched now but that`s got to be the goal."