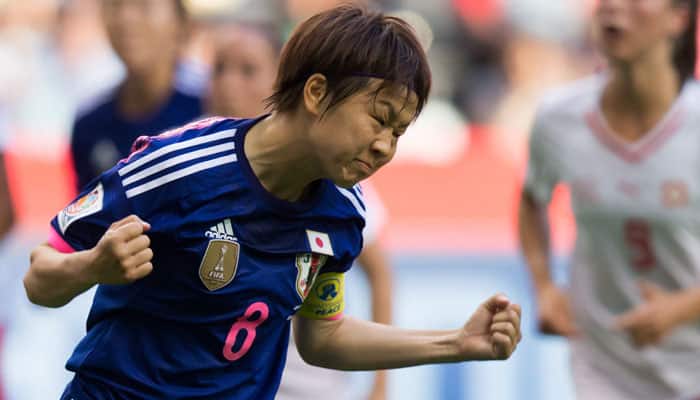 A first-half penalty converted by captain Aya Miyama got defending champions` Japan`s Women`s World Cup campaign off to a winning start against Switzerland on Monday.

The 29th-minute penalty, awarded after Frankfurt midfielder Kozue Ando was fouled inside the box by Swiss goalie Gaelle Thalmann, was the only goal of the night at Vancouver`s BC Place Stadium.

But it was enough to seal all three points for the "Nadeshiko" -- Japan`s nickname and a pink flower symbolising grace and beauty.

The tie marked the 200th cap for veteran Homare Sawa and the 150th for Miyama, who also scored her 37th international goal.

"I`m very happy that Sawa could celebrate her 200th game with a win," said Miyama.

Coach Norio Sasaki however substituted Sawa in the second half with young teammate Yuri Kawamura, at 26 years ten years the former world player of the year`s younger.

"She (Sawa) wasn`t injured, but I`m using her in a more protected manner," said Sasaki cautiously, of the talisman player who had been hampered by injuries in the past year.

"I told her that I would do this."

Despite a strong performance from young Swiss forward Ramona Bachmann, Martina Voss-Tecklenburg`s debutants failed to convert any of their chances.

"She`s the saddest girl tonight," said Voss-Tecklenburg of 24-year-old Bachmann who missed a chance just before the break to level but her drive went just wide.

"She`s shown on the world stage what she can do, she`s a fantastic player."

She again missed another chance after the break after outfoxing three Japanese defenders and goalkeeper Erina Yamane, only to slip on the artificial turf.

The Asian champions went close to doubling their lead midway through the second half but Yuika Sugasawa`s shot hit the post.

Bachmann continued to push forward looking for the winner but a last-gasp chance went over the bar.

Japan next play Cameroon, who are top of Group C after their 6-0 thrashing of fellow newcomers Ecuador, earlier in Vancouver, and are equal on points with Japan.

"I wish we had played this game in a much cooler manner," said Sasaki. "At the beginning there was pressure from the Swiss and it was very tense.

"But we won, that is the most important, and I`m glad that we can send home this news that we won."

The South Americans and Switzerland will be looking for their first points when they play each other next Friday.