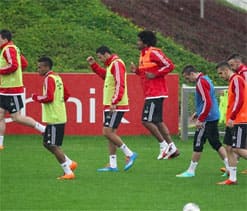 Berlin: Bayern Munich need a convincing win at Bundesliga bottom side Eintracht Braunschweig on Saturday to dismiss talk of a mini-crisis ahead of their Champions League semi-final at Real Madrid.

With only two wins in their last six games, Bayern have suffered a dip since winning the Bundesliga nearly a month ago with a record seven games to spare.

Bayern booked their place in next month`s German Cup final with a 5-1 drubbing of second division Kaiserslautern in Wednesday`s semi-final in Munich.

But Munich`s director of sport Matthias Sammer said while the scoreline was impressive, the performance was lacking spark.

"I had the feeling that we`re not really running hot at the moment," said Sammer, who questioned Bayern`s desire to win the Champions League and German Cup finals.

"For the tasks we are facing, that`s not enough. We have to ask ourselves if we still want to win these two titles."

On paper, Bayern`s trip to Braunschweig looks straightforward, but the hosts have picked up seven points in their last four games to boost their survival bid.

Braunschweig are without injured captain and striker Domi Kumbela, a rich source of goals for them in recent weeks, and are just three points from safety.

Bayern will be without right-back Rafinha, who is serving a three-match ban after being sent off in last Saturday`s 3-0 league defeat at home to Borussia Dortmund.

There is also a question mark over Germany goalkeeper Manuel Neuer who missed the mid-week game with a calf strain.

It remains to be seen whether coach Pep Guardiola rests his squad or looks for some continuity by naming a strong team four days before the trip to Real.

Second-placed Borussia Dortmund host Mainz looking to pick up their fifth straight win having booked their German Cup final berth against Bayern on May 17.

Dortmund enjoyed a 2-0 win over Wolfsburg in Tuesday`s semi-final but both goalkeeper Roman Weidenfeller (groin) and striker Robert Lewandowski (thigh) are carrying knocks.

Lewandowski scored his 100th goal for Dortmund against Wolfsburg, but his final match in the black and yellow jersey will be against future employers Bayern in the cup final.

Seventh-placed Mainz 05 now find themselves in a Europa League spot due to both cup finalists Dortmund and Bayern having qualified directly for next season`s Champions League.

A few shock results can be expected in the last four weeks of the season with sides desperate for points in the lower half of the table set to surprise those higher up.

A good example is Saturday evening`s tie when relegation-threatened Hamburg host VfL Wolfsburg, who are just a point off a Champions League berth for next season.

Hamburg are the only team in Germany`s top-flight to have never been relegated and have just four games left to escape the bottom three.

Hamburg coach Mirko Slomka is without centre-back Heiko Westermann who has a groin injury.

There will be a similar points battle when Nuremberg host Bayer Leverkusen on Sunday with the visitors eager to hold off Wolves and stay fourth.

Second-from-bottom Nuremberg are two points from safety, but have lost their last three games.

Likewise, Leverkusen have fragile confidence with only two wins in their last 13 matches despite their fourth place and fired coach Sami Hyypia a fortnight ago.
Playing Saturday