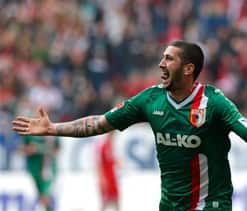 Berlin: Augsburg`s Sascha Moelders inflicted Bayern Munich the first loss after an unbeaten streak of 53 games while Dortmund came from behind to shock Wolfsburg 2-1 Saturday.

Newly crowned champions Bayern Munich lost their first match since October 2012 as Pep Guardiola trusted in a second string side. The Bayern coach made seven changes in his starting team as his side focuses on UEFA Champions League and the German Cup. Therefore, Bayern had difficulties to put up some resistance against courageous hosts, Xinhua reported.

Xherdan Shaqiri unleashed the first shot on target for the runaway leaders with 10 minutes into the game.

However, it was the hosts that played more focused and rewarded themselves with the opener at the 31st minute through Sascha Moelders. Daniel Baier snatched the ball from youngster Mitchell Weiser to tee up for Moelders, who slotted home from the inside left into the top right corner since October.

After the restart Bayern piled on the pressure but their endeavours remained unrewarded as neither Mario Mandzukic nor Javi Martinez overcame Augsburg`s custodian Marwin Hitz.

The hosts nearly extended their advantage but the post denied Moelders the second strike of the day. Both teams stayed on their positions, Bayern on first and Augsburg on eighth place.

Second placed Dortmund needed only a powerful second half to turn the tides against Wolfsburg by courtesy of Marco Reus` winner in the closing period.

Both teams staged a sloppy opening period with many misplaced passes and turnovers. As the match progressed, Wolfsburg took the reins to open the scoring through Ivica Olic who benefitted on a rebound to tap in from four meters at the 34th minute. The "Wolves" almost doubled their advantage but the bar denied Olic twice six minutes later.

However, things changed during the second half when the "BVB" shocked Wolfsburg with the leveller, against the run of the game. Robert Lewandowski found Marco Reus` corner inside the box to restore parity six minutes after the restart. It is Lewandowski`s 17th goal of the campaign.

From now on Dortmund dominated the game while Wolfsburg wobbled. Yet, it was a fumble by Wolfsburg goalkeeper Max Gruen that allowed Marco Reus to poke home from close range, completing the 2-1 comeback at the 77th minute.

Dortmund`s victory extended their gap to third placed Schalke to three points whilst Wolfsburg slumped from 5th to 6th place.

Third placed Schalke and midtable Bremen shared the spoils following a 1-1 draw at the Weserstadium. Bremen took a perfect start on home soil when Franco Di Santo made use of Eljero Elia`s assist to poke home from very sharp angle at the 15th minute.

Schalke responded 18 minutes later when youngster Leon Goretzka capitalised on a second ball to hammer home from 15 metres the 1-1 leveller.

Bremen`s Sebastian Proedl retained the draw for his side when he cleared another Goretzka effort from the goal line.

With the draw, Bremen reduced their relegation fears as Schalke were stuck on third place with 55 points.