Bayern Munich underlined their status as Bundesliga champions-in-waiting as Saturday`s 4-0 thrashing of Augsburg moved them 10 points clear at the top of the German league. 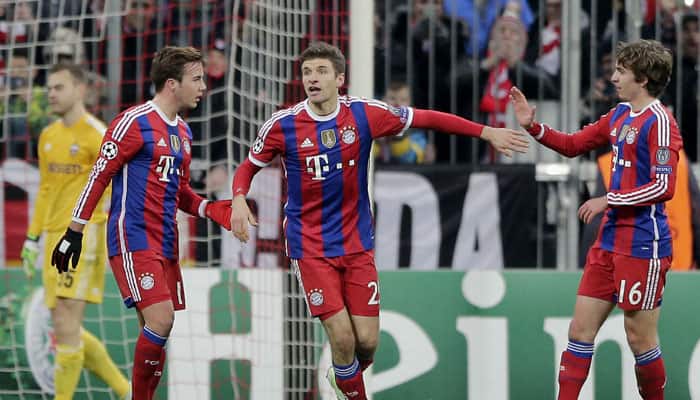 Berlin: Bayern Munich underlined their status as Bundesliga champions-in-waiting as Saturday`s 4-0 thrashing of Augsburg moved them 10 points clear at the top of the German league.

With second-placed Wolfsburg playing Paderborn on Sunday, Bayern seized the chance to extend their lead at third-placed Augsburg and remain on course for a third straight title.

Bayern, who started with Thomas Mueller and Mario Goetze on the bench, can further hammer home their superiority later this week when they host Freiburg on Tuesday before travelling to face Mainz on Friday in their last league match of 2014.

"I am very, very proud, because I know how hard it is to win at Augsburg," said Bayern coach Pep Guardiola.

"We were much more aggressive and combined quicker in the second-half.

"Once again, I am surprised by the mentality of these players, who have already won everything, but they always just want to win, win, win.

"We have two more games now this week which we`ll try to win."

After a goalless first-half, Bayern burst into life after the interval as Arjen Robben netted twice while Medhi Benatia and Robert Lewandowski were also on target.

Centre-back Benatia headed his first Bayern goal on 58 minutes, then Robben slotted his ninth in all competitions just two minutes later when he curled his shot in around the post.

Poland striker Lewandowski claimed their third when he fired home a final pass from captain Bastian Schweinsteiger on 68 minutes.

Despite qualifying for the Champions League`s last 16, Borussia Dortmund dropped back into the relegation places after slumping to a 1-0 defeat at Hertha Berlin.

Dortmund`s ninth defeat in 15 league games -- the most in Germany`s top flight -- saw them drop to 16th from 14th having started December at the bottom.

To rub salt into the wounds, Julian Schieber scored the first-half winner against his old club.

"We hear week after week that we are a great team, but this `awesome` team also has awesome problems," admitted Dortmund coach Jurgen Klopp.

Klopp had to replace attacking midfielder Heinrikh Mkhitaryan, who has injured his thigh, for Poland`s Jakob Blaszczkowski with 35 minutes gone.

Blaszczkowski lost possession in midfield, Norway`s Per Skjelbred pounced on the loose ball and fed Berlin striker Schieber, who fired home on 40 minutes.

Stuttgart remain bottom of the league despite picking up a point with a 1-1 draw at mid-table Mainz.

Having scraped into the Champions League`s last 16 with a 1-0 win at Slovenia`s Maribor on Wednesday, Roberto di Matteo`s Schalke 04 slumped to a 2-1 defeat at home to Cologne.

Teenage replacement Leroy Sane scored his first goal for Schalke by way of consolation on only the 18-year-old`s fourth league appearance as Schalke dropped to sixth.

Hamburg were held to a goalless draw at Freiburg with both teams just above the bottom three.

On Sunday, fourth-placed Bayer Leverkusen host Borussia Moenchengladbach with Lucien Favre`s side just one place behind in the league table.

On Friday, Hoffenheim enjoyed a 3-2 win at Eintracht Frankfurt to stay seventh and just outside the European places for next season.

EPL: Olivier Giroud, Santi Cazorla score against Newcastle to get Arsenal back on track