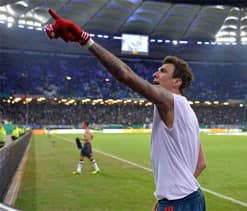 Ricardo Rodriguez converted two penalties and was sent off as VfL Wolfsburg won 3-2 at Hoffenheim in another quarter-final tie.

Mandzukic is unlikely to score an easier hat-trick than Wednesday`s when he was left to score three tap-ins by a shambolic Hamburg defence which was easy meat for the rampant Bavarians.

Hamburg had lost their last six games, including a woeful 3-0 drubbing at home to Hertha Berlin on Saturday which was followed by fan protests outside the stadium.

Since then, the club has been swept by rumours that coach Bert van Marwijk is set to be replaced by Felix Magath and some had suggested the change could have taken place before Wednesday.

In the event, the Dutchman was still in the hot seat although he might have wished otherwise as Bundesliga leaders and German Cup holders Bayern quickly showed the gulf in class.

Hamburg were completely outplayed but clung on for 22 minutes before Mario Goetze escaped down the left and sent over a low cross which Mandzukic, who was left unmarked, tapped in.

Bayern increased their lead with an equally simple goal four minutes later as Dante beat his marker to the ball to head in from a corner before Arjen Robben swept home the third after he was brilliantly picked out by Toni Kroos in the 54th minute.

Bayern welcomed back Bastian Schweinsteiger as a second-half substitute for his first game since undergoing a second operation on his ankle in November.

Mandzukic tapped in the fourth from another Goetze pass in the 74th minute and pounced on an awful Hamburg mix-up to complete the scoring two minutes later.

Kaiserslautern appeared to have missed their chance when Mohammadou Idrissou fired his penalty wide in the eighth minute of extra time.

But the Cameroon forward atoned by providing the cross for Ruben Jenssen to win the tie with six minutes of the extra 30 remaining.

Rodriguez converted two first-half penalties for Wolfsburg, with Roberto Firmino briefly levelling in between, and Bad Dost added a third.

Rodriguez, already booked for a professional foul, was given a second yellow for time-wasting in the 71st minute but Firmino`s second goal of the game was all that Hoffenheim could muster in reply.

Borussia Dortmund, who won 1-0 at Eintracht Frankfurt on Tuesday, complete the semi-final line-up.

Arsenal retreat into shell to draw blank with United