Last season`s Bundesliga runners-up Borussia Dortmund slumped to a 1-0 home defeat by 10-man Augsburg on Wednesday to continue their spectacular implosion and remain firmly anchored to the foot of the standings. 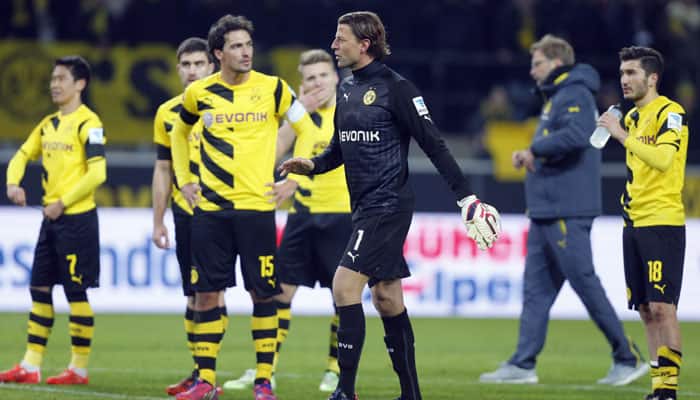 Berlin: Last season`s Bundesliga runners-up Borussia Dortmund slumped to a 1-0 home defeat by 10-man Augsburg on Wednesday to continue their spectacular implosion and remain firmly anchored to the foot of the standings.

The 2011 and 2012 Bundesliga champions completely lacked ideas in front of a sold-out 80,000 crowd and were easily outmuscled by European hopefuls Augsburg for whom Raul Bobadilla netted the winner in the 50th minute to seal his club`s first ever win over Dortmund.

Surprise packages Augsburg, who had Christoph Janker sent off midway through the second half, shut out Dortmund in the last half hour and climbed into fourth place on 33 points courtesy of their third successive league win.

Dortmund, who take on Juventus in the Champions League round of 16 this month, are 18th on 16 after their 11th league loss this season.

Coach Juergen Klopp was left speechless after the game while goalkeeper Roman Weidenfeller and defender Mats Hummels went straight to speak to their furious fans.

"We can be accused of anything tonight and it is all justified," Klopp told reporters. "Battling also means having the courage to take the right decision. We were missing that tonight."

Dortmund showed attacking spirit in the first half with Marco Reus scraping the post but failed to intimidate the visitors.

Argentine Bobadilla rifled in from close range after four Dortmund players failed to stop a charging Halil Altintop in the 50th minute.

Augsburg kept pressing for a second goal but held back after Janker was sent off for bringing down Pierre-Emerick Aubameyang outside the box with only keeper Alex Manninger to beat.

Dortmund failed to make the extra man count and did not carve out a single chance until the final minute when Ciro Immobile`s close-range header was saved by Manninger.

"If one is in this position after 19 games then it would be unacceptable not to have understanding for the fans` reactions," Hummels said.

Rafael van der Vaart converted a penalty after Hamburg were awarded the fastest Bundesliga spot-kick since timings were introduced in 2004-05 just eight seconds into the game.

Goals from Marcell Jansen and Zoltan Stieber made sure of the three points and lifted Hamburg to 13th on 20 points.

Bayern Munich maintained their eight-point lead at the top on 45 points despite their 1-1 draw against Schalke 04 as second-placed VfL Wolfsburg also drew against Eintracht Frankfurt on Tuesday.