Jurgen Klopp says Borussia Dortmund must use their dazzling Champions League displays to fix their nightmare Bundesliga form after reaching the last 16 in Europe on Tuesday. 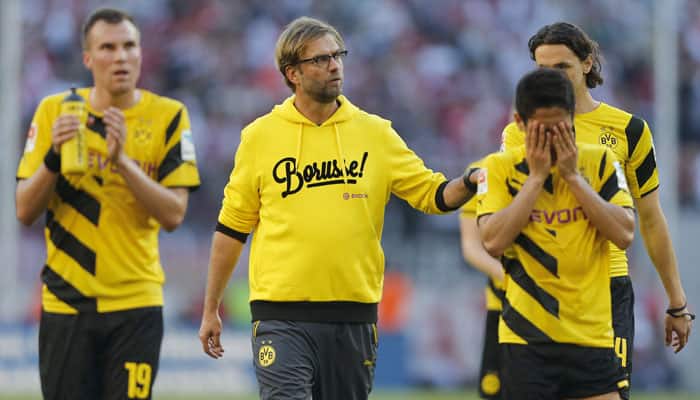 Berlin: Jurgen Klopp says Borussia Dortmund must use their dazzling Champions League displays to fix their nightmare Bundesliga form after reaching the last 16 in Europe on Tuesday.

Dortmund brushed off five consecutive defeats in the German top flight to romp to a 4-1 Champions League win at home to Galatasaray on Tuesday to go five points clear at the top of Group D.

Alongside Real Madrid, they are one of the first teams into the Champions League`s knock-out stage despite the worst start to a Bundesliga season in the club`s history.

Bizarrely, Dortmund have now picked up nearly double the points, 12, in their four Champions League matches than the seven they have from their 10 Bundesliga matches.

Klopp says they must use the confidence-boosting win over Galatasaray to break their losing streak when they host high-flying Borussia Moenchengladbach on Sunday.

"I told the lads to enjoy this, it`s important," said Klopp.

"We`ve got to feel the good things from this win, there are five days until the next game."

Goals either side of half-time from Marco Reus and Greece defender Sokratis Papastathopoulos put 2013 Champions League finalists Dortmund on their way to the knockout phase.

Galatasaray`s Berlin-born defender Hakan Balta pulled one back for the visitors midway through the second half before the hosts scored twice more to put the result beyond doubt.

Italy striker Ciro Immobile made the difference when he came off the bench for Reus just after Galatasaray scored.

He netted Dortmund`s third just three minutes and 26 seconds after coming on to kill off the away side`s fight-back, then compounded the Turks` misery when his cross was deflected into the Galatasaray net by defender Semih Kaya.

"That was very disciplined, the team had things under control from the first minute," said Klopp.

"We defended well and, when our tactical measures didn`t quite work, we compensated with passion and scored some great goals."Galatasaray can expect a UEFA fine after their fans repeatedly let off fireworks at the Westfalenstadion.

The game was held up twice in the second half as Galatasaray fans threw fireworks onto the pitch, then set off a flare in the stands in the closing few minutes, in a repeat of scenes when they played Arsenal away a month ago.

"Everything was done in terms of security, but they still get this stuff through. It`s remarkable. I hope it calms down," fumed Klopp.

Galatasaray`s former Bayern Munich and Schalke midfielder Hamit Altintop said they had come up well short of their pre-match expectations.

"Sadly, we lost the game because of individual mistakes," said the 31-year-old.

"We knew that Dortmund had the talent and skill in attack. Dortmund didn`t play that well, but we built them up.

"I contributed my part to the defeat," he added having failed to prevent the Immobile goal despite a desperate tackle.

Galatasaray coach Cesare Prandelli said his side had improved from their 4-0 defeat to Dortmund in Istanbul a fortnight ago, although they have just one point from their four group games and prop up the section.

"It was not a fair result when you look at our display," he said.

"The guys had been working very hard, but we have improved compared to our first game in Istanbul.

"We conceded the goals because of some little mistakes, which we`ll improve on."