Borussia Dortmund reclaimed top spot in the Bundesliga from Bayern Munich on Sunday with a 3-1 victory over Hertha Berlin -- their eighth straight win under new coach Thomas Tuchel. 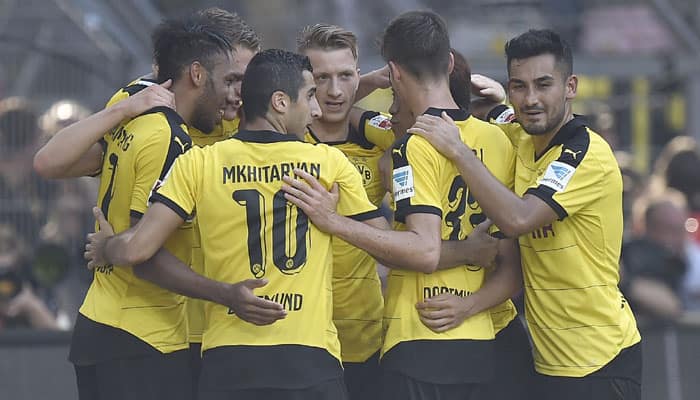 Berlin: Borussia Dortmund reclaimed top spot in the Bundesliga from Bayern Munich on Sunday with a 3-1 victory over Hertha Berlin -- their eighth straight win under new coach Thomas Tuchel.

As the only teams in Germany`s top flight to have won their opening three matches, Dortmund are matching Bayern`s impressive early form as the Bavarians bid to become the first side to win fourth straight German titles.

Dortmund are top on goal difference from Bayern, who romped to a 3-0 home win over Bayer Leverkusen on Saturday.

Borussia saw off Hertha at their Westfalenstadion with goals from captain Mats Hummels, Pierre-Emerick Aubameyang and Adrian Ramos.

"The hardest thing today was to keep the pace up," said Hummels, who said his side were feeling the effects of Thursday`s 7-2 win at home to Odds BK to qualify for the Europa League`s group stages.

"It wasn`t a good performance from us, but we still won.

"We could have decided it earlier and it was annoying to concede the late goal, because we were a little flat."

Aubamenyang claimed his seventh goal in eight games after right-back Matthias Ginter combined with Kagawa to set up a simple tap-in on 51 minutes.

Ex-Chelsea striker Salomon Kalou pulled a goal back for Hertha on 78 minutes before Colombia striker Adrian Ramos came off the bench to score Borussia`s third in injury time.

Champions League side Borussia Moenchengladbach are enduring their worst start to a Bundesliga season as three straight league defeats left them bottom after losing 2-1 at Werder Bremen.

Wolfsburg are third after beating Schalke 3-0 at home on Friday without attacking midfield star Kevin de Bruyne, who completed his transfer to Manchester City on Sunday.

Cologne finish the weekend fourth after a 2-1 comeback win at home to Hamburg in controversial fashion.

But the game turned on a dubious red card and penalty.

Hamburg`s ex-Bosnia captain Emir Spahic was sent off on 79 minutes for the slightest of touches on Cologne striker Anthony Modeste, who drilled home the spot-kick to the fury of the visitors` bench.

Japan striker Yoshinori Muto warmed up for his country`s World Cup qualifier against Cambodia in Saitama on Thursday with his first two Bundesliga goals in Mainz`s 3-0 win over Hanover before Yunus Malli claimed their third.

Socceroos forward Mathew Leckie also scored his first goal in Germany`s top flight in Ingolstadt`s 1-0 win at Bavarian rivals Augsburg with a superb shot inside the left-hand post on 63 minutes.

Ten-man Stuttgart are second from bottom after a 4-1 defeat at home to Eintracht Frankfurt as Poland goalkeeper Przemyslaw Tyton was sent off for the hosts.

Darmstadt are 12th after their third straight draw following a goalless effort at home to Hoffenheim.