Borussia Dortmund defender Neven Subotic believes that a win in the Bundesliga against Vfb Stuttgart on Friday will provide the perfect boost ahead of their Champions League showdown with Juventus. 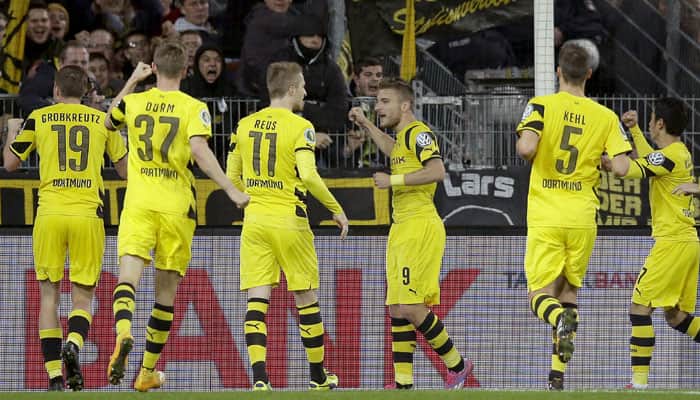 Berlin: Borussia Dortmund defender Neven Subotic believes that a win in the Bundesliga against Vfb Stuttgart on Friday will provide the perfect boost ahead of their Champions League showdown with Juventus.

Dortmund play the first leg of their last 16 tie against the Italian league leaders in Turin on Tuesday.

Before travelling to Italy though, Juergen Klopp`s side face a crucial German league match away to bottom of the table VfB Stuttgart.

Back-to-back wins over Freiburg and Mainz - coupled with key midfielder Marco Reus`s decision to sign a new contract - have lifted the mood at Dortmund.

The club is still only one point above the relegation zone, however, and Subotic knows that they cannot afford to look ahead to a glamorous European tie just yet.

"The best thing we can do is play well against Stuttgart to get some confidence before we go into Europe."

Subotic scored his first goal of the season in last week`s 4-2 home win against his former club, Mainz, a result that saw Dortmund climb one place to 15th in the 18-team standings.

Dortmund came from 2-0 down to draw against Stuttgart the last time the sides met in September. Although the home team have failed to win any of their last five matches, Subotic is not expecting an easy time on Friday.

"They have a good team and I don`t think anyone expected them to be last place. It is a surprise to everyone: they have good players, a great stadium and a rich tradition.

"But we know the situation can happen to anybody and just because you are last place doesn`t mean you`re a bad team. We were in last place ourselves until just a little while ago, so we respect their situation."

In contrast to their domestic form, Dortmund have excelled in Europe this season and topped their group ahead of Arsenal, Anderlecht and Galatasaray.

Next week promises to be a big one for the club. After playing Juventus on Tuesday, they host arch rivals Schalke in the Revierderby on Saturday.

However, Subotic insists that Dortmund are focused solely on picking up another three points against Stuttgart.

"We know they can be a firework, we have to watch out, be patient and not rush things," the Serbian international said.

"We have to watch them on the counter-attack, stay focused and not make any stupid errors."