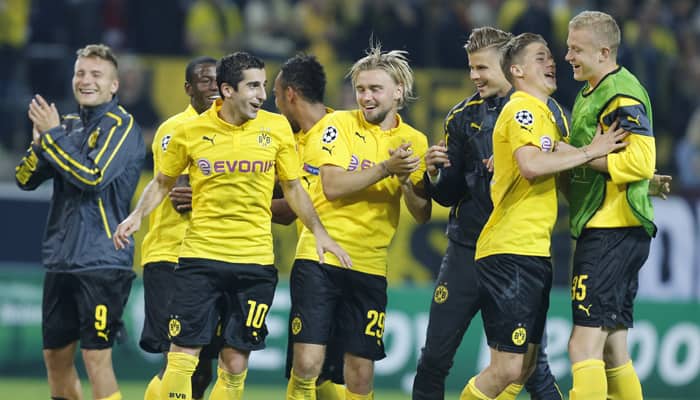 Borussia Dortmund are confident their away goal will be enough to carry them past Juventus despite defensive blunders that saw them lose 2-1 in their Champions League Round of 16 first leg in Turin in Tuesday.

Dortmund have only themselves to blame for leaving the Italian city with a defeat, with both of Juve`s goals exposing a napping defence in an otherwise solid performance by the Germans, especially in a strong first half.

The Germans, title winners in 1997 against Juve and finalists in 2013, are gradually recovering from a dismal domestic first half of the season, and the result on Tuesday despite the mistakes, has handed them a measure of confidence.

"We did a lot of things right, especially in the first half, but the two goals were easy, too easy," coach Juergen Klopp told reporters. "Our defending was not perfect. We made it easy for Juve."

The German, who was forced to change his game plan in the second half after making two substitutions with defenders Lukasz Piszczek and Sokratis Papastathopoulos off injured, will have an arguably stronger squad in the return leg in March.

Central defender Neven Subotic and forward Kevin Kampl, both out with a stomach bug, will be back as will Papastathopoulos, whose muscle injury is seen as not too serious.

For Piszczek more tests will be needed on Wednesday to determine the extent of his leg injury but Klopp hinted he could be out for some time with what is suspected to be a ligament injury.

"For one good half and a mediocre second half it is a result we can live with. We are still in the running," said Klopp.

"We made it a tight race with the goal we scored and I don`t think we are returning home unhappy," Klopp said.

But not all is rosy at last season`s Bundesliga runners-up, with keeper Roman Weidenfeller experiencing a major dip in form, costing him his automatic starting spot at times this season.

On Tuesday, he again looked far from his best when the World Cup winner failed to clear an Alvaro Morata cutback properly, sending it into the path of charging Carlos Tevez.

Juve`s renewed lead through Morata after Marco Reus` equaliser again exposed Dortmund`s Achilles` heel this season, with five Dortmunders looking on as the Juve player slipped undisturbed into the box for the 2-1.

"We did not have a good second half, too few chances for us," said Reus. "But everything is still there for the taking. We now have to finish this off in the return leg."