Iran`s outgoing coach Carlos Queiroz was stopped from flying out of the country Saturday over tax matters, media reports said, forcing his players to leave Tehran for Europe without him. 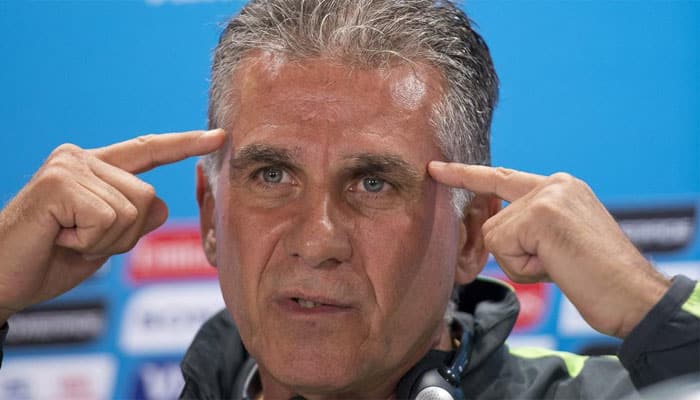 Tehran: Iran`s outgoing coach Carlos Queiroz was stopped from flying out of the country Saturday over tax matters, media reports said, forcing his players to leave Tehran for Europe without him.

The 62-year-old Portuguese resigned his post on Friday, citing external "pressures" just six months after extending his contract until 2018.

He is due to finish his tenure at the end of March after friendlies against Sweden and Chile, but as he and the team were heading out of Tehran`s Imam Khomeini International Airport for those matches Queiroz was prevented from boarding the plane.

"Mr Queiroz was told he is subject to a prohibition on leaving the country for non-payment of taxes. The players left without him," the official IRNA news agency said.

However, a later report by the ISNA news agency said the tax problem had been solved and Queiroz was set to rejoin his squad.

"The federation is trying to put him on the first plane," said Alireza Assadi, general secretary of the Iranian Football Federation (IFF).

The incident was the latest run-in that Queiroz has had in Iran.

The former Real Madrid coach and Manchester United assistant was "very angry" when told he could not travel, ISNA reported.

According to reports, Queiroz`s contract stipulates that the IFF must pay his taxes.

Queiroz`s future as Iran boss had been in doubt since before last summer`s World Cup where his side had a chaotic buildup to the finals.

Training camps were cancelled and Queiroz also complained that there was not enough money to kit out his players with strips and other gear, leading to rows with officials that played out in the media.

Despite winning respect at the finals in Brazil for shaping a plucky team out of a modestly talented squad, Iran ultimately lost out in the first round.

His abrupt resignation Friday appeared to signal he and Iranian officials were at odds again.

"I didn`t want to leave and was not even thinking about it," he told the Fars news agency on Friday.

"It was not in my control and it was not my decision. Even my boss didn`t want this but unfortunately both sides were forced to agree on this because of pressures."

Queiroz`s team had a disappointing exit from the Asian Nations Cup in January, losing on penalties to Iraq in a fiery quarter-final after which he questioned how the referee could sleep at night.