German teams scored a point -- or more accurately, seven -- in their rivalry with English clubs this week, coming out on top in two of their three Champions League duels, with the third resulting in a share of the spoils. 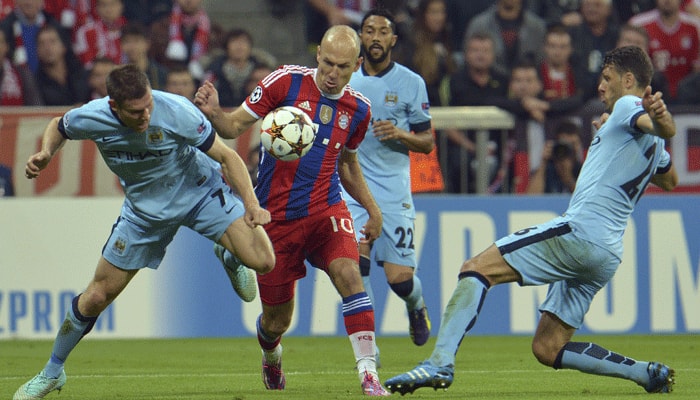 Berlin: German teams scored a point -- or more accurately, seven -- in their rivalry with English clubs this week, coming out on top in two of their three Champions League duels, with the third resulting in a share of the spoils.

Bundesliga champions Bayern Munich certainly had the better of English champions Manchester City throughout their clash, although they needed a 90th minute goal from former City player Jerome Boateng to win that Group E opener 1-0.

Borussia Dortmund had a much easier job against Arsenal, easing past them 2-0 with a scintillating performance at home that left the Londoners dazed and Arsene Wenger heaping praise on German counterpart Juergen Klopp.

Even troubled Schalke 04, who have scraped together only a single point from their first three German league games -- and lost to third tier Dynamo Dresden in a domestic Cup match -- fought their way back at Chelsea on Wednesday, snatching a 1-1 draw through a Klaas-Jan Huntelaar equaliser.

That stalemate marked a big improvement on their two matches against Chelsea in the group stage last season, which Chelsea won 3-0 home and away.

"We are proud with what we achieved here," Schalke coach Jens Keller told reporters, simply verbalising what could be seen on the players` faces.

That draw not only gave coach Keller some respite, but also highlighted the distance German clubs have come in the past few seasons, a fact underlined most poignantly by the all-German Champions League final between Bayern and Dortmund at Wembley in 2013.

German football has been trailing the English game both in terms of success on the pitch and in terms of finances for years, but Bundesliga clubs are taking large strides to close that gap.

"Even a relegation-threatened team in England earn more from broadcast rights than Bayern Munich," Bayern CEO Karl-Heinz Rummenigge said last week, identifying one of the issues the German clubs face on what has become an uneven playing field.

But while TV rights and salaries remain far bigger in the Premier League, it has been a different story regarding success on the pitch in recent seasons.

Bayern have claimed a Champions League title and reached the final three times in the past five years, with Dortmund also making the final in 2013 and Schalke reaching the last four in 2011.

Their winning ratio against English clubs so far this season is even more impressive given that Premier League teams spent over one billion euros (1.29 billion US dollar) in transfers this summer, with their German counterparts splashing out less than 300 million.

Despite all their riches, English clubs have disappointed in the Champions League, notwithstanding Chelsea`s penalty shootout win over Bayern in the 2012 final.

Arsenal have gone out in the round of 16 for four successive seasons, Manchester City got there last season, but never further, while mighty Manchester United, who failed to even qualify this season, have not progressed beyond the quarter-finals since 2011 after winning the competition in 2008 and falling just short in the finals of 2009 and 2011.

Wenger, before seeing his team soundly beaten in Dortmund, was asked if he thought English clubs could re-assert their dominance this season and outlast Bayern Munich, Real Madrid and Barcelona.

"The main threats will be the German and Spanish teams," he said. "Look at the number of times Bayern have been in the final. There is no reason why they should not be there again."

Although it is still early in the season with just one Champions League match played, Germany have struck the first blow. And based on the evidence so far, it seems unlikely English teams can turn the tables on Germany and counter Wembley`s May 2013 all-German final with an all-English affair in Berlin at this season`s final on June 6.