Roberto Mancini has committed his long-term future to Inter Milan and believes the club will be strong enough next season to challenge for their first title in six years. 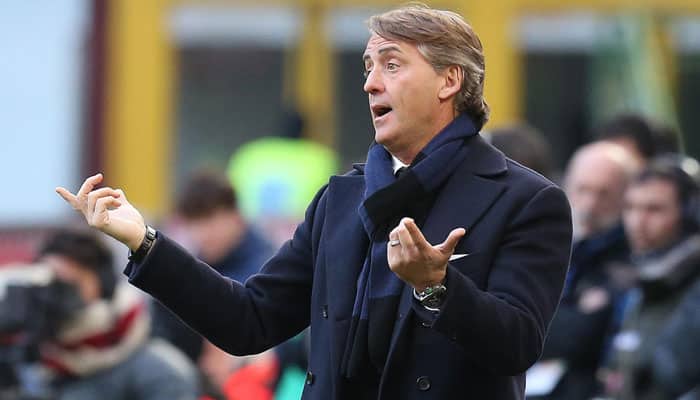 Milan: Roberto Mancini has committed his long-term future to Inter Milan and believes the club will be strong enough next season to challenge for their first title in six years.

Reports had suggested Mancini, back for his second stint at the club following spells with Manchester City and Galatasaray, could quit the San Siro if Inter failed to qualify for Europe next season.

Inter are ninth in Serie A, 23 points behind leaders Juventus but only 10 behind Napoli in the third and last Champions League qualifying spot.

But Mancini has indicated he will remain at Inter for the long term.

And the Italian believes Inter, who last won the Italian title in their treble-winning season of 2010, will be back to challenge for the "scudetto".

"There is always lots of talk," said Mancini when asked about the speculation. "For now all I`m thinking about is building a strong future at the club.

"I`m confident Inter next year will be fighting for the title."

On Sunday, Inter face a Napoli side who are 13 points behind Juventus but only four shy of Roma in second spot.

Rafael Benitez`s men were stunned 1-0 away at Torino last week, their second reverse in three games, but lifted morale with a 1-1 draw away to Lazio in the first leg of their Italian Cup semi-final on Wednesday.

The Spanish coach will be without defender Miguel Britos and Italian midfielder Christian Maggio, with Manolo Gabbiadini and Jose Callejon set to accompany Gonzalo Higuain in Napoli`s three-pronged attack.

But the Spaniard believes Napoli`s 1-0 Italian Cup quarter-final win over Inter, and his previous experience coming up against Mancini in both the English Premier League and Champions League, augurs well for Sunday.

He told Radio Kiss Kiss: "Inter have a strong squad since they spent a lot of money in January on players who fit the new coach`s demands. I hope the San Paolo (stadium) will make the difference for us.

"We did well against Inter in our Italian Cup tie and I`ve also faced Mancini in the Champions League, so I know Inter and hope we`ll come away with a similar result to the Cup game."

Mancini`s side are arguably in more dire need of all three points, but the Italian added: "Of course it will be a tough game against a great side, but I want to see us playing well as well as taking the points from a great side."