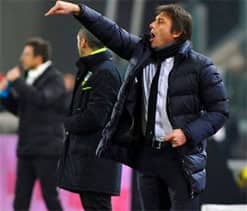 The Italian champions lost out to Real Madrid and Galatasaray in Europe`s elite club competition but Conte has his sights set on winning a unique treble.

Juventus can still secure a third-straight Serie A title, as well as the Europa League – with the final being held at the club`s home stadium – and what would be a record-breaking 10th Coppa Italia prize.

The Juve coach was speaking after he won the Dubai Globe Soccer Awards title for Coach of the Year ahead of Rafael Benitez and Jurgen Klopp.

Conte said: "We want to roll up our sleeves in 2014. We want to take the Europa League, especially as the final will be played at the Juventus Stadium.

"This season we still want to win it all. There could be a third Scudetto in a row and the Coppa Italia too. If we win the Coppa that would be a record, as we could be the first side to win it 10 times.

"The Champions League elimination in Istanbul still stings, but we couldn`t really play football that day against Galatasaray. Next season we will resume our assault on that competition."

On winning the coaching award in Dubai, Conte was keen to thank his players for their performances over the calendar year.

He added: "This honour fills me with pride and I above all thank my players for helping me achieve this award. Without doubt, the credit is to be split with my lads.

"Will I win the Fifa Coach of the Year award? There is still a very long way to go before achieving that because you need to win international trophies like Pep Guardiola and Jose Mourinho did."