Dortmund farewell too painful for Klopp after Cup loss

Borussia Dortmund coach Juergen Klopp battled to contain his emotions on Saturday after his final game on their bench saw his team lose 3-1 to VfL Wolfsburg in the German Cup final. 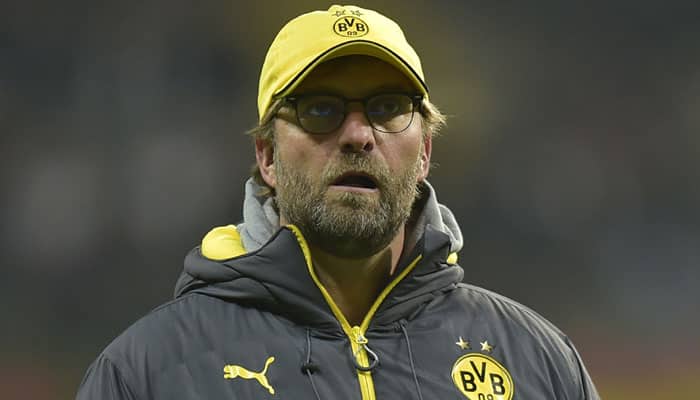 Berlin: Borussia Dortmund coach Juergen Klopp battled to contain his emotions on Saturday after his final game on their bench saw his team lose 3-1 to VfL Wolfsburg in the German Cup final.

Klopp, who is leaving after seven years in charge, said he would not be talking about his "painful" departure, adding it could have been a completely different game if Dortmund had enjoyed a bit more luck.

"The departure is starting to be painful now. Now there won`t be a Cup party, just a farewell party," he told reporters.

Wolfsburg scored three times in 16 minutes after Pierre-Emerick Aubameyang put Dortmund ahead in the fifth minute.

"My emotional state is now below average," Klopp said, while evidently holding back the tears. "I am working very hard at the moment to process this defeat."

The German, courted by seemingly every top European club, had announced his departure months ago after Dortmund`s bad domestic season.

"We could have scored a second goal before the break. We had the chances. Congratulations to Wolfsburg but for us it was completely unnecessary.

"We did a lot of things well. We lacked luck. For me, in life, the biggest challenge is to deal with defeats."

The 47-year-old crowd favourite is leaving after having taken over in 2008 and leading Dortmund to the Bundesliga title in 2011. He won a domestic league and Cup double in 2012 while also adding two German Super Cups to the club`s collection.

Emotional, passionate and a proponent of attacking football, Klopp`s success coincided with the financial recovery of the club after being on the brink of bankruptcy a decade ago.

He also led them to the Champions League final in 2013.

"I know everyone wants to know about how I feel," Klopp said, his voice cracking as Dortmund fans unfurled a large banner reading "Thank You Klopp for seven years".

"But if I start with that, then the tears come. We lost a game and I cannot make as if I am the most important person in the world.

"I have to process things one after the other. First, this game. I will process the other thing without having TV cameras in my face."