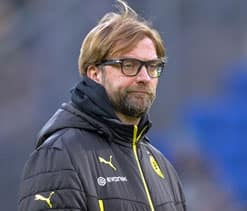 Madrid: Borussia Dortmund coach Juergen Klopp was left rueing mistakes and missed chances as he dismissed suggestions his team had been outplayed in Wednesday`s 3-0 Champions League reverse at Real Madrid.

Dortmund were punished by Gareth Bale`s third-minute opener after leaving too much space between the lines, Klopp complained at a news conference after the quarter-final, first leg at the Bernabeu.

They gifted Real their second and third goals, scored by Isco and Cristiano Ronaldo, after needlessly surrendering possession.

The Dortmund coach refused to concede defeat ahead of Tuesday`s return match in Germany but admitted Real, chasing a record-extending 10th European title, were very likely to claim a berth in the last four for a fourth straight season.

"In the second half we had so many chances and we didn`t take any of them," Klopp, whose side knocked Real out in last season`s semi-finals, told a news conference.

"But I know that this team can do it better and that`s what I have to think about," added the 46-year-old.

"What is important is that we are clear about why this result happened and make sure we get a better one in the next match."

Dortmund have been ravaged by injuries to key players this term and were also missing suspended Poland forward Robert Lewandowski, who put four goals past Real in last season`s semi-final, first leg.

By contrast Real, the world`s richest club by income, spent a record 100 million euros on Bale in the close season, when they also strengthened their squad by signing Isco from Malaga.

However, Klopp insisted that Wednesday`s defeat had nothing to do with any difference in quality between the two teams.

"We should never have conceded any of the goals tonight," he told reporters.

"We got to where we wanted to be in their penalty area but we couldn`t put the ball in the net.

"In all probability Real are in the semi-finals but there is still one more match to play.

"It`s my job to hope for things. The only thing I can say is we`ll be there."

The team that qualifies will go into the draw for the last four to be held on April 11.

Mourinho left with regrets as Chelsea lose in Paris