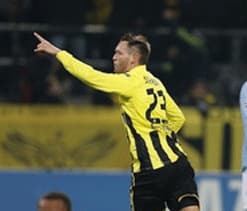 Berlin completed their sixth transfer for the upcoming season as Schieber joined the "Blue-Whites" until June 2018, reports EFE.

"We observed Julian Schieber`s career with interest for a long time. He fits perfectly into our requirement profile. We are glad that he opted for Hertha," Berlin`s sporting manager Michael Preetz said in an official statement.

The 25-year-old striker started his professional career at Stuttgart to play four years for the "Swabians" until 2012. During his time at Stuttgart he played one year for Nuremberg on loan. Schieber played since 2012 for Dortmund; however, he never made the breakthrough into the starting team, scoring only three goals in 35 appearances.

"I am very glad to play for Hertha Berlin and for their fans. Coach Jos Luhukay and manager Michael Preetz convinced me absolutely," the new arrival commented.

Schieber is said to replace Michel Pierre Lasogga who, as German media speculates, will stay with Hamburg, where he played last season on loan.

Hertha Berlin completed the last season at 11th place in the Bundesliga standings.