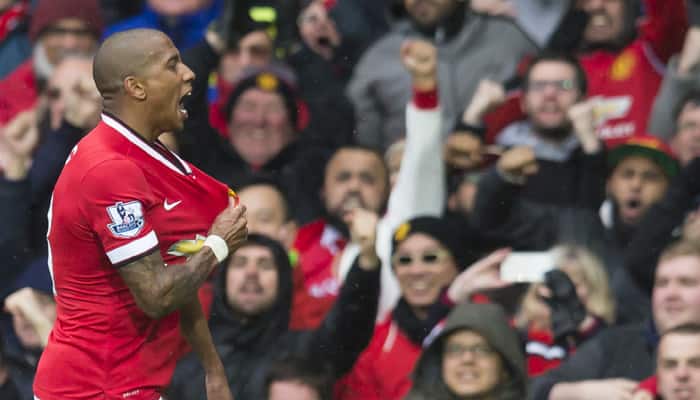 United are a point behind second-placed Arsenal, who have played one match fewer, but Young is confident Louis van Gaal`s third placed side can overtake the Gunners and finish as runners-up behind likely champions Chelsea.

"Everybody is confident in the team that we can finish as high as we can," Young said ahead of United`s trip to Everton on Sunday.

"Second place is still there for us to take and we just have to win every game now. Every game is a cup final, we have to go out and win."

United head to Goodison Park aiming for a response following their 1-0 defeat by Chelsea last weekend.

Van Gaal`s team felt they were unlucky not to leave Stamford Bridge with at least a point and Young, 29, says the players will take encouragement from their display against the champions-elect.

"We will take the positives out of the Chelsea defeat, when we didn`t think we should have been beaten," Young said.

"We had all of the possession and the chances. We felt Chelsea just sat there and obviously they got the goal, but on another day we could have scored two or three goals.

"It`s another tough game now -- we always have tough games when we play Everton away.

"The fans are close to the pitch and there`s a good atmosphere whenever we play there.

"We have got to be right. We want to get back to winning ways and we`re going there to win.

"We are going into Sunday`s game full of confidence and I`m sure if we play as well as we have done recently, then we will get the win."Van Gaal is hopeful that Dutch international Daley Blind will be available but Michael Carrick, Marcos Rojo and Phil Jones are ruled out with injury.

Brazilian right-back Rafael, who has made only 11 appearances this season, will miss the remainder of the campaign after suffering broken ribs.

Having spent much of the season uncomfortably close to the wrong end of the table, Everton appear to have finally clicked into gear now that their Europa League campaign is over.

A sequence of four wins from their last six matches has moved Roberto Martinez`s team to 12th and a top-half finish is now a realistic target.

"After January we got used to playing in Europe," Martinez said.

"Five games ago we had to win games and the response has been exceptional.

"We are in a good moment of form and having competition for places. We`re not the same team we were when we started in Europe.

"Some performances since January have been very mature. We go to Goodison with real confidence, and the fans now see a more mature team."

Martinez is optimistic he will be able to call on Leon Osman and James McCarthy, while striker Romelu Lukaku is fully fit.