Chelsea increased their lead at the top of the Premier League with a 1-0 win at QPR on Sunday as Manchester United added to Manchester City`s woes with a come-from-behind 4-2 derby victory at Old Trafford. 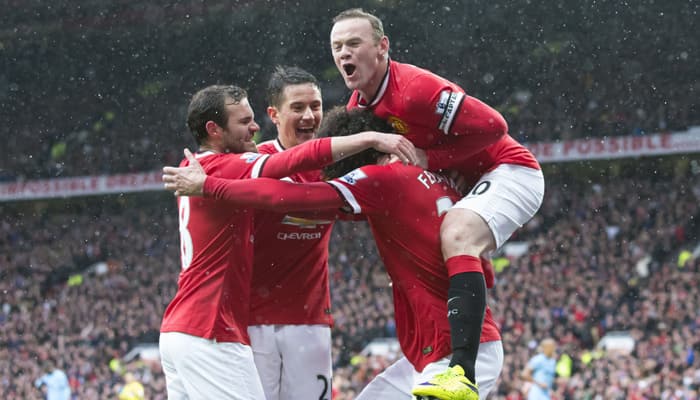 London: Chelsea increased their lead at the top of the Premier League with a 1-0 win at QPR on Sunday as Manchester United added to Manchester City`s woes with a come-from-behind 4-2 derby victory at Old Trafford.

But there was no shortage of goals in Manchester, where Sergio Aguero gave defending champions City the lead only for United to hit back through Ashley Young, Marouane Fellaini, Juan Mata and Chris Smalling.

Aguero scored his and City`s second -- his 100th goal for the club - in the 89th minute but it was too little too late to ease the pressure on under-fire manager Manuel Pellegrini.

This result saw third-placed United move four points in front of fourth-placed City as they strengthened their bid for direct entry into next season`s Champions League.

In west London, Chelsea didn`t break down a stubborn QPR defence until the 88th minute when Fabregas scored with their only on-target shot of the match in a move initiated by a poor clearance from home goalkeeper Robert Green.

"It is one step closer (to the title)," Chelsea manager Mourinho told Sky Sports. "Our situation is good. Pure mathematics. We need 11 points."Meanwhile Mourinho refused to condemn QPR fans who showered his players with a variety of objects thrown from the stands after Chelsea scored their goal.

Branislav Ivanovic grabbed his neck in pain after being struck while Nemanja Matic was also targeted as coins, a plastic bottle and a cigarette lighter flew towards the pitch.

But QPR manager Chris Ramsey added: "We don`t want objects thrown on the pitch. These rivalries can sometimes go too far."

At Old Trafford, United ended a run of four straight derby defeats with their sixth succesive league win against all opponents.

Prior to kick-off, Pellegrini accused his side of throwing their season "into the garbage" in recent months following the club`s elimination from the FA Cup and Champions League.

But it was City who went ahead when Aguero tapped in from close range in the eighth minute.

And the hosts were 2-1 in front come the 27th minute when Fellaini headed in Young`s centre.

Mata added a third goal midway through the second half when, played in by Wayne Rooney, he slotted the ball between the legs of England goalkeeper Joe Hart.

More poor City defending then ensured United centre-back Smalling was left completely unmarked to head in a Rooney free-kick in the 73rd minute as Louis van Gaal`s side went 4-1 ahead.

The result left United eight points behind Chelsea, with City 12 adrift of the leaders.

EPL Gameweek 32, United vs City: As it happened...