These are seemingly dark and worrying times for Nigel Pearson but you will not find the blunt-speaking Leicester City manager searching for sympathy -- he wants points and nothing else. 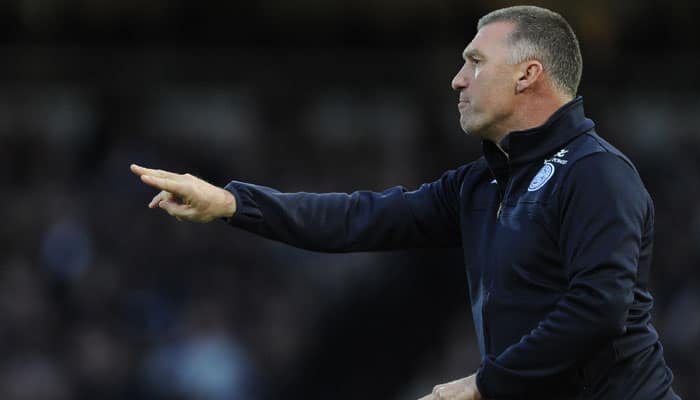 London: These are seemingly dark and worrying times for Nigel Pearson but you will not find the blunt-speaking Leicester City manager searching for sympathy -- he wants points and nothing else.

On the face of it, a tumultuous few days for Pearson at the Premier League`s bottom club took another turn for the worse on Tuesday when Leicester, in danger of being cast adrift, lost 2-1 at Arsenal who moved into the top four.

But a spirited performance, which earned praise from Arsenal manager Arsene Wenger, might be enough to persuade the Midlands club`s owner Vichai Srivaddhanaprabha that he still has the right man to drag the Foxes out of the mire.

The Thai was seemingly unconvinced after defeat by Crystal Palace at the weekend, Perason`s unsightly touchline spat with visiting player James McArthur making the wrong headlines with Leicester forced to deny reports their manager had been sacked.

Pearson was unequivocal despite a third successive defeat following their FA Cup fourth round win at Tottenham Hotspur.

"They don`t want to get rid of me," he told reporters. "I`m here. I had lunch with the owners today."

Given that Leicester last won at Arsenal in 1973, expectations of a shock victory were slim and so it proved with a fourth successive league reverse.

But sides fighting for survival do not always get rewarded for their endeavours and the points stayed with the hosts.

But a lively and committed Leicester display, with Algerian Riyad Mahrez a persistent menace, prompted Pearson to shake each of his players by the hand at the end.

Wenger said Leicester were one of the better teams his side had faced this season but that just added to Pearson`s frustration.

"Yes, we`re capable, yes we can perform against big sides, but we have got to find that extra ingredient in turning those performances into wins and, more importantly, beating the sides in and around us.

"Our points return does not reflect how we`ve played. I do think we have right type of people at the club to give us a good chance in the last phase of season."

Leicester came to Arsenal to have a go and caused enough problems to suggest all is not yet lost.

Esteban Cambiasso was a steady presence in midfield and, although first-half goals from Laurent Koscielny and Theo Walcott put Arsenal in control, Leicester did not cave in.

Record signing Andrej Kramaric grabbed a confidence-boosting first goal for the club just past the hour and, as the Arsenal fans howled in frustration, Leicester went for broke.

Pearson threw on two more strikers in Leonardo Ulloa and David Nugent but Mahrez was still the main threat, going closest to an equaliser with a bending effort that flew inches wide.