Chelsea manager Jose Mourinho said on Friday that it will take a "phenomenal" offer for him to sell out-of-favour German winger Andre Schurrle in January. 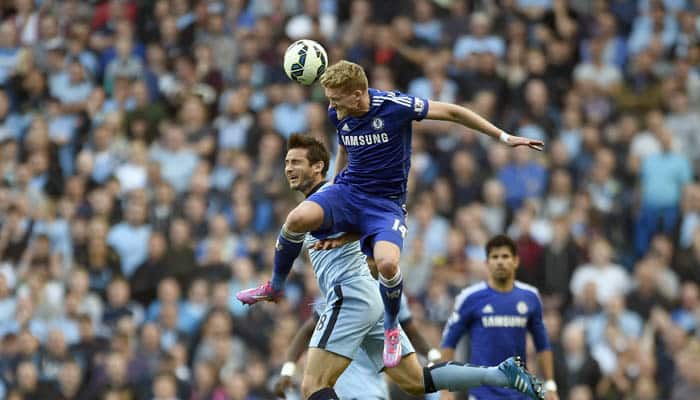 London: Chelsea manager Jose Mourinho said on Friday that it will take a "phenomenal" offer for him to sell out-of-favour German winger Andre Schurrle in January.

Schurrle, who set up the winning goal for Germany in last year`s World Cup final, is understood to be seeking a move back to his homeland after growing frustrated at making just 11 starts this season.

Wolfsburg and Borussia Dortmund are among the clubs reportedly keen to bring the 24-year-old back to the Bundesliga.

Mohamed Salah is also attracting interest, amid reports Chelsea have lined up Fiorentina winger Juan Cuadrado and Shakhtar Donetsk midfielder Douglas Costa to replace him and Schurrle should they leave.

But Mourinho said: "The principle is we`d like him (Schurrle) to stay.

"The question is not to have a good offer; it`s to have a phenomenal offer and the player has to be super keen to accept a new challenge in his career.

"But for Schurrle to get a first-team place, he must start playing better than Eden Hazard and Willian.

"I can`t say they (Schurrle or Salah) will still be here at the end of the month, but I like and need them and trust them.

"I can`t select the same 18 every game. I can only play 11. Salah is not playing a lot, Schurrle more, but they have played in every competition. I count on them.

"The club doesn`t move (in the transfer market). Our desire is to keep the same squad, which reflects that we are happy with the players and work we did in the summer."Mourinho added: "We played against Burnley at the start of the season and Andre was in the starting line-up and Willian was on the bench.

"As a consequence of a good performance and a goal he scored, the next game he was in the team again.

"In this moment, the way Hazard and Willian are performing, the stability of their performances in attack... unless I find a tactical system with three wingers, it`s difficult to be in front of Eden and Willian because they are performing so well.

"He (Andre) is not a kid to moan. It`s easy to feel. He`s a good professional. He always works well."

Schurrle and Salah could both start when Chelsea host third-tier Bradford City in the FA Cup fourth round on Saturday.

Captain John Terry and goalkeeper Thibaut Courtois will be among the first-team players rested at Stamford Bridge, but Mourinho said he will align as strong a team as possible.

"We have two knockout matches in three days, so after Tuesday (when Chelsea play Liverpool in the second leg of their League Cup semi-final), we can be in four competitions or only two," he said.

"Of course we want to try to be in all four. But it`s two consecutive knockout matches, two cups, in three days. That says everything.

"The third match is just a Premier League match, one of 38, and that is different. It doesn`t decide anything, but Bradford and Liverpool, yes. They decide if we are still in the competition.

"This season we played already against League One teams and Championship teams and I don`t remember an easy game."