Filippo Inzaghi`s future as AC Milan coach has been thrown into doubt and Saturday`s match at home to Verona is being billed as his last chance to keep his first senior coaching job. 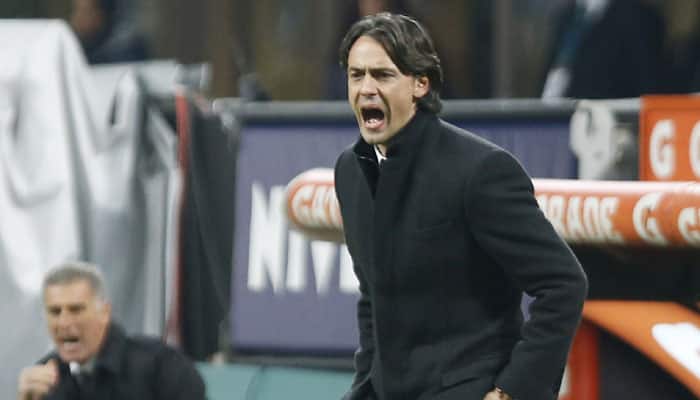 Milan: Filippo Inzaghi`s future as AC Milan coach has been thrown into doubt and Saturday`s match at home to Verona is being billed as his last chance to keep his first senior coaching job.

In what has become a familiar routine, once-mighty Milan`s season has turned into a story of crisis, false dawns, injuries and new signings who have failed to settle in, with the coach left to pick up the tab for the club`s failings.

Fernando Torres came and went, scoring one goal in four months, and forwards Alessio Cerci and Mattia Destro have managed one goal between them since joining in the January transfer window.

Gazzetto dello Sport said that Galliani was particularly worried about the number of injuries, which have been a recurring feature at the seven-times European champions over the past three seasons.

Even if Inzaghi survives Saturday, Italian media are already speculating on who may replace him at the end of the season and the names of Borussia Dortmund coach Juergen Klopp and Fiorentina`s Vincenzo Montella have been thrown into the mix.

Milan, who finished eighth last season, have slumped to joint 10th in the table after being held 0-0 at lowly Chievo last weekend.

The Champions League already looks way beyond their reach and they are struggling to even qualify for the much-maligned Europa League, which would condemn them to a second season without European football.

Inzaghi, who was promoted from coaching the under-19 team to become Milan`s third coach in less than one year at the start of the season, is going through the same turbulent process as his predecessors Massimiliano Allegri and Clarence Seedorf.

Both fell victim to a combination of unrealistically high expectations and a lacklustre squad and made several visits to last chance saloon and reprieves before they were eventually fired.

Critics say Milan have been left standing by domestic and international rivals who have stronger youth programmes, better scouting and clearer philosophies of how to run their club.

In January, the Curva Sud supporters` group said that Galliani, not Inzaghi, was responsible for the team`s failings.

"Inzaghi, in reality is just yet another coach who is given a low level squad which is presented as if it`s the best side in the world," said the fans in a statement.

"The architect of the team is... the chief executive (who) acts in the total absence of a project, pays huge wages for players of dubious value or even throws away the little transfer budget he is given on terrible signings."

Chelsea can sense they are almost there to win EPL title