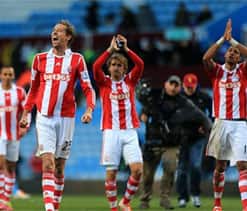 Stoke City came from a goal behind to beat Aston Villa 4-1 on Sunday and so leapfrog their opponents into 10th place in the Premier League table.

Christian Benteke`s early goal put the hosts 1-0 up early on at Villa Park but Stoke were 3-1 ahead at half-time after Peter Odemwingie, Peter Crouch and Steven Nzonzi all scored for the visitors.

After the break, Geoff Cameron set the seal on a comprehensive win for Mark Hughes` men by adding a fourth goal in the final minute of normal time.

It took Paul Lambert`s Villa side just five minutes to open the scoring in front of the Birmingham club`s own fans.

Fabian Delph broke free on the left before cutting the ball back to Benteke on the penalty spot. The Belgium forward, given time and space, powered the ball into the roof of the net with his left foot.

But two goals in five minutes saw Stoke turn the match on its head.

Towering England forward Crouch headed the ball perfectly into the path of strike partner Odemwingie and the former West Bromwich Albion forward burst between two defenders before stabbing the ball under advancing Villa goalkeeper Brad Guzan in the 22nd minute.

Barely had Villa absorbed the impact of the equaliser then Stoke were ahead.

Erik Pieters held off Andreas Weimann down the left and sprinted clear before crossing to the waiting Crouch and the former Villa forward side-footed the ball into the corner.

Stoke, belying their reputation as a `long-ball` team, then kept possession for an extended spell but, significantly, there was a tangible result to their neat play when Nzonzi scored their third goal three minutes before half-time.

Marko Arnautovic`s through ball from the left did not look that dangerous but Villa`s Nathan Baker failed to make proper contact and N`Zonzi`s powerful shot from the edge of the box gave Guzan little chance.

The second half didn`t live up to the excitement of the opening period but, in the 64th minute, Stoke almost scored again when Odemwingie unleashed a powerful, swerving, shot from 20 yards which Guzan, changing direction, did well to parry.

But the fourth goal Stoke had been threatening arrived in the 90th minute when more impressive wing play from Arnautovic saw the Austrian cut the ball back to Cameron, who scored from 10 yards out.