Striker Mario Goetze scored twice in a 3-1 win over Poland which put Germany top in their group as Northern Ireland moved closer to the Euro 2016 finals by beating the Faroe Islands 3-1 on Friday. 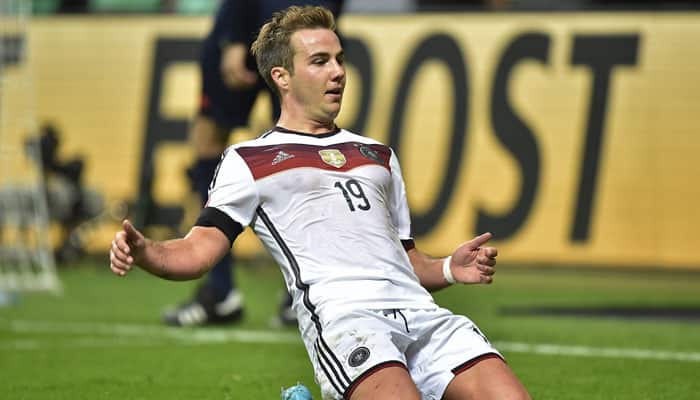 Paris: Striker Mario Goetze scored twice in a 3-1 win over Poland which put Germany top in their group as Northern Ireland moved closer to the Euro 2016 finals by beating the Faroe Islands 3-1 on Friday.

It was Poland`s first defeat in seven Euro 2016 qualifiers with the world champions gaining revenge for losing 2-0 in Warsaw last October to knock Adam Nawalka`s side from top of Group D.

Georgia`s 1-0 home win over Scotland, who Germany play in Glasgow on Monday, and the Republic of Ireland`s 4-0 thumping of Gibraltar means Germany are top with 16 points with Poland second on 14 while Ireland go third with 12, one ahead of the Scots.

"We had just one objective - to win the match, it was the most important," said Germany coach Joachim Loew.

"Overall I can only be very satisfied, we produced some super football in the first 35 minutes. The Polish chances came uniquely from our mistakes."

All four goals came from Bayern Munich players as Thomas Mueller gave Germany an early lead, then Goetze made it 2-0 before Poland captain Robert Lewandowski pulled one back with a diving header for 2-1 at the break. Mueller and Goetze then combined for Germany`s third on 82 minutes.

A double from captain Robbie Keane, which took his international tally to 67, and goals from Cyrus Christie and Shane Long saw the Republic of Ireland past Gibraltar in Faro. Martin O`Neill`s side next play Georgia in Dublin on Monday.

"There is still a long way to go but we got the job done," said Keane. "Monday will be a massive game for us."In Group F, Northern Ireland are just one victory away from their first European championship final as they sit top with 16 points, one point ahead of Romania who were held to a goalless draw in Hungary.

Two goals from Gareth McAuley and a third from Kyle Lafferty sealed the victory with the Faroe Islands hit by Joan Edmundsson`s sending off of after 64 minutes for a second bookable offence.

The Northern Irish will qualify if they beat Hungary on Monday night at Windsor Park.

"We seem to have come through unscathed and it would be fantastic if we could do it in front of our own fans at Windsor Park," said Northern Ireland manager Michael O`Neill.

Finland came away with a 1-0 win from Greece in a match between two teams struggling in Group F.

Meanwhile Euro 2016 hosts France ended their run of defeats with a 1-0 friendly win over Portugal in Lisbon thanks to a late Mathieu Valbuena freekick.

Substitute Valbuena`s curling effort five minutes from time got Les Bleus back to winning ways after three loses in four matches, but striker Nabil Fekir was stretchered off after 13 minutes with an injury which was later confirmed as a ruptured cruciate ligament in his right knee which will rule him out for six months.

Didier Deschamps`s side have another friendly lined up against Serbia on Monday in Bordeaux.

In Group I, Cristiano Ronaldo`s Portugal were the big winners despite not playing a qualifier after group rivals Denmark and Albania played 0-0 in Copenhagen.

Portugal lead the group with 12 points, one point ahead of Albania and Denmark.

Albania host Portugal on Monday with the Scandinavians travelling to modest Armenia who lost 2-0 at Serbia, bottom of the table after being deducted three points.

Lionel Messi, Sergio Aguero at the double in Bolivia rout