Kerala Blasters franchise is the first investment in the growing sports business in the country for this consortium. 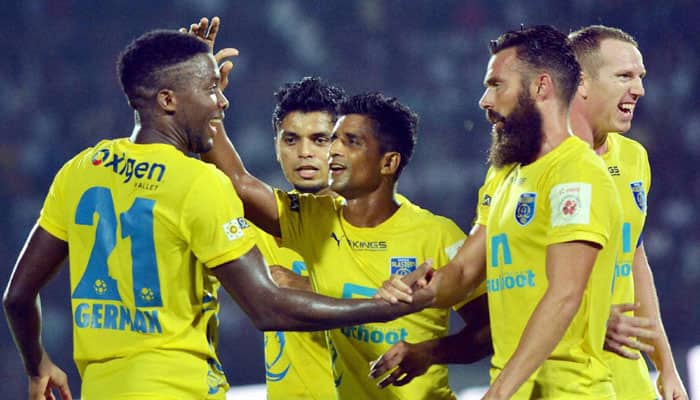 Thiruvananthapuram: Cricket legend Sachin Tendulkar was today joined by some of the biggest names in the Indian film industry, including Chiranjeevi and Nagarjuna, as co-owners of Indian Super League football side Kerala Blasters.

The new investors in Kerala Blasters were unveiled at a ceremony here.

Tendulkar will continue to be a co-owner with Kerala Blasters, holding a significant stake, a media release said.

The new co-owners of Kerala Blasters were responsible for the turnaround of MAA Television Network Ltd. They recently unlocked value in the broadcast bouquet of the network with the sale of its four Telugu entertainment channels to Star TV Network.

Kerala Blasters franchise is the first investment in the growing sports business in the country for this consortium.

Earlier in the day, Tendulkar and all the new co-owners met Kerala Chief Minister Pinnarayi Vijayan at the state secretariat. They also had a meeting with Kerala Football Association President K M I Mather.

Commenting on the development, Tendulkar said, "We are beginning our third season in right earnest and have some of the biggest names coming on board as investors in Kerala Blasters. I welcome Chiranjeevi, Nagarjuna, Allu Arvind and Prasad to this exciting experience which is made more special with the faith and unique place that Kerala Blasters holds in the hearts of millions of its followers."

Chiranjeevi said, "I have been an aspiring footballer on the reel and I am very excited to be part of a popular club co-owned by Sachin Tendulkar. All of us in Kerala Blasters are committed to expanding the football base in the state and give the potential talent a platform to perform and excel."

"I have been supporting sports in the country and I am excited to start with football and a very special football team ? the Kerala Blasters. I am keenly looking forward to experience the craze for the game in the state and beyond and wish the team the very best," said Nagarjuna.

I`ll let you know where I will go when I`m tired of all speculations: Zlatan Ibrahimovic tells reporters